10 Things You Should Know About Absinthe 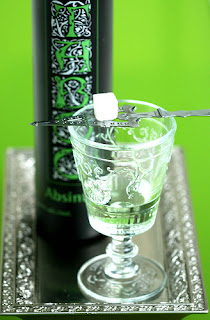 Cocktails and mixology are becoming more and more popular, which means that the general knowledge of spirits is increasing. However, absinthe still seems to have a bad reputation, even among people who are better informed. It seems like most people I chat with about spirits reveal that they think either absinthe is illegal, or that we can't get "real" absinthe in North America. Neither of these are true!
Here are 10 quick facts you should know about absinthe:

1) Absinthe is NOT illegal.
It hasn't been illegal for about 20 years now in a lot of countries. The sad part is that it never should have been outlawed in the first place. The only reason that this happened is because of propaganda perpetuated by wine companies in France in the early 1900's when absinthe was becoming very popular and really taking a bite out of wine sales. It wasn't hard to create rumours at the time considering that many artists, writers, and bohemian folk at the time were big fans of absinthe and already had a bad reputation with conservatives at the time. I'll get more into these issues below.

2) Absinthe is NOT hallucinegenic.
This is part of the propaganda. There were even stories in France of regular men drinking absinthe, then going home and killing their families, then claiming not to remember what happened the next day. I'm sure we all knew someone when we were teenagers who got their hands on some absinthe or something similar, drank it, and claimed that they were seeing shit and tripping balls. Yeah, they weren't.
Unfortunately, a few famous artists have contributed to this as well, namely Van Gogh and Oscar Wilde , the latter who described the feeling of drinking it as "having tulips on his legs" when he left the bar. Of course, he's a writer, and people need to stop taking those people so seriously ;)
So, with the evolution of modern science paired with curiosity, it became possible to actually test these things. "Real" absinthe (and I'll get into why "real" is in quotations later) is distilled from, or usually infused with grande wormwood,  which does contain a chemical called thujone, which can cause hallucinations and even death - HOWEVER...
here is the confusion and misinterpretation: the amount of thujone required to have any effect on the human body is extremely high compared to how much thujone can be found in any absinthe. You would die from alcohol poisoning several times over before getting enough thujone into your body to hallucinate.
Bottom line: absinthe is not lethal, hallucinogenic, nor is it any kind of drug other than alcohol.

3) Absinthe is not a liqueur.
Despite what the B.C. Liquor Stores classify it as (as well as numerous websites even as popular as about.com), absinthe has no added sugar, therefore it is not a liqueur. It is not a wine, nor is wine fortified to make it. Because it is none of the above, and it is a distilled alcoholic beverage, it is therefore classified as a spirit.

4) Absente, pastis, anisette, pernod, ouzo, and sambuca (and the list of other Mediterranean anise-flavoured beverages) are not absinthe, nor do they taste the same.
They do taste somewhat similar though, because they all have one flavour in common: anise. Most of these are liqueurs or aperitifs flavoured with anise, but none of them contain wormwood, which is what makes absinthe absinthe. Their flavours are much simpler, lighter, and often sweeter. Absinthe has a very herbal taste, namely of anise and fennel, with a slightly bitter aftertaste from the wormwood, and is fairly potent.
If using it in a cocktail, use very little - in fact, a lot of bartenders and mixologists will use an atomizer to spray absinthe in or over the glass to get the aroma without letting the taste overpower the rest of the drink. Often recipes will call for a measure of pastis, but the drink will be much more interesting with absinthe, and you'll probably only need a dash.

5) Absinthe is not made by magic, fairies, or in bathtubs.
It's actually made a lot like gin, in that a neutral grain spirit is infused with herbs. Wormwood has been used for about 4000 years for its medicinal properties, but it wasn't used in distillation with anise and fennel as absinthe until the late 18th century. Traditional absinthe was redistilled from a grape spirit, then infused with botanicals. Absinthe will also often be steeped with certain herbs, such as the wormwood, during production, to ensure that a good amount of chlorophyll is in the mix, which plays a chemical role and provides a natural green colour. This steeping also gives the spirit its potent herbal flavours and aromas.

6) Absinthe can vary in colour, but it is never neon green.
If you see a bottle of absinthe that is bright, neon green, it's coloured artifically. Actually, if you can see the colour of the absinthe in the bottle at all, it's probably not a good one. Because chlorophyll is sensitive to light, proper absinthe should be in a dark glass bottle to protect it from chemical change. Absinthe can also be clear in colour and still be absinthe, and can even be coloured red by steeping in certain flowers.

7) Just because the bottle says "absinthe" does not necessarily mean there's absinthe inside.
This is the most sad and confusing part of all. Because absinthe only somewhat recently became legal, it's not properly regulated in most countries. Regulations on spirits define how they're made, aged, etc, and ensures that if you drink from a bottle labeled "bourbon," for example, you're actually drinking bourbon.
Using bourbon as the example, regulations state that it must be distilled from at least 51% corn, made in the United States, distilled at no higher than 80% alcohol, put into new, charred oak barrels at no more than 62.5% alcohol, and bottled at no less than 40% alcohol. Very specific.
Absinthe, at the moment, has no such regulations whatsoever (except in Canada where the only regulation is the amount of thujone per volume allowed in the final product, which is not only kind of pointless, but is also very different province to province). This means, technically, that I could piss into a bottle, label it absinthe, and legally sell it as such in liquor stores in a lot of different countries. Ok, I'm exaggerating, but just be aware that there's often funky business going on.
The important lesson here is to do a little research, look up a review, read the label, avoid the neon green colours, etc, before you buy your bottle. As with any food or drink, it's always a good idea to avoid artificial additives if you can, as there is no reason for alcohol to have added flavours or colours other than to save money or mask cheap production (ex. Jose Cuervo), or as a gimmick (ex. Bols triple secs or bright green absinthe - but there are exceptions to the colour category).
A great way to go here in Canada, is to just buy Taboo. It's made in the Okanagan Valley with grande wormwood, and it's very good.

8) Enjoying absinthe properly requires only water.
NEVER set your absinthe on fire. You're ruining the flavour and burning off the alcohol, which is a waste. How did this come about? Well, once you know, you probably won't want to do it again. As far as I can find in my research, the reason for this originally is because absinthe got so popular (and banned) that people everywhere were trying to make it, and make it cheaply. Making things cheaply means dangerous by-products and awful taste, and setting the absinthe on fire sometimes got rid of both. Sometimes. In the 1990's, more advertisements and rumours and movies started showing this as a tradition, and unfortunately a lot of people came to think this is the proper way to enjoy it. In fact, there is no evidence that this burning ritual was ever used before the 1990's. This means, first of all, that cheap, crappy modern absinthes asking you to set shit on fire should be avoided like the plague, and secondly, that movies like "From Hell" which showed Johnny Depp in 19th century London setting his absinthe alight are factually inaccurate. Czech, or "Bohemian" absinthe is advertised to be enjoyed this way. Of course, most Czech absinthe is not really absinthe because they contain no wormwood (it's actually called absinth without the "e"), and most of them are cheap and terrible. I don't see how any spirit that calls for itself to be set on fire (which means they want you to burn something out of the liquid) can be good. This includes you, sambuca.
The traditional, or French way to enjoy absinthe is to pour the absinthe into a glass, rest a slotted spoon holding a sugar cube over top of the glass, then drip ice cold water into the absinthe. Slowly, the colour will change to opaque and milky. The reason this happens is because certain herbal oils (such as the wormwood and fennel) are not soluble in water. This is called "louche." Absinthe can be enjoyed anywhere from 1:3 to 1:7 absinthe:water. Some don't even require a sugar cube, such as the above mentioned Taboo, which is not very bitter at all. 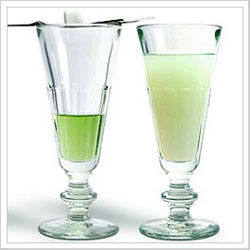 9) It's not cool or badass to drink absinthe.
Ok, so this one is not factual but rather just my opinion. Again, I come back to the weiner you knew in high school (though actually I heard a couple of these stories this year and I'm long out of high school) who found a green liquid, whether it was absinthe or not, set that shit on fire with his friends, drank what after the burning was probably the equivalent of wine, then told everyone it's the coolest ride, dude. I met some folks this year who went into an alley with some cheap crap to set it on fire and meet the green fairy like they were 14 and just found their grandma's medicinal marijuana. It probably tasted awful and didn't even get them that drunk. Anyway, I'm being a little pretentious, but everyone knows THAT guy. The "I'm so high right now" guy. The "dude, I got so fucked up this weekend man bra" guy. I hate that guy.

10) Absinthe is good.
If you don't like the flavour of anise, which is similar to licorice, you won't like it much, but there are a lot of other interesting herbal flavours involved. Honestly, I mostly use mine as a dash here or there in particular, delicious cocktails - partially because I feel so guilty about how much I payed for it and I want it to last forever. A bottle will run you $55 in BC, so definitely make sure you enjoy it and enjoy it properly. As always, you can head down to the states for a lot more selection at a lot cheaper (Taboo, which is made right here in B.C., is a lot cheaper to buy in Seattle).
Posted by Rhett at 13:32