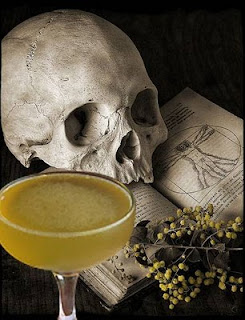 Today we're going to do a very delicious and refreshing cocktail hailing from 19th century England, but really gaining popularity in the cocktail age of the 1930's. The name is also Halloween-appropriate, even though I'm over a week late...

The History:
The Corpse Revivers are a family of cocktails intended to be hair of the dog, drunk in the morning to cure a hangover. They supposedly showed up in the 1860's, but no recipes were officially published until 1930 in Harry Craddock's seminal cocktail tome, "The Savoy Cocktail Book." Craddock was an American bartender who moved to London during Prohibition, joined the American Bar in the Savoy Hotel in London in 1920 and became one of the biggest names in the art of drink-mixing. He is definitely one of the most influential bartenders as most of us still follow his example and recipes today.

Only a couple kinds of Corpse Revivers survived, the most famous and memorable of which is definitely #2.

The Ingredients:
Should you be new to mixed drinks, here is some general information on the ingredients used in this cocktail:

Cointreau isn't cheap, but you use fairly little in most cocktails. A 375mL bottle, which costs about $18, will last me a few months. It's also comparably priced in B.C. versus most of the U.S., which is always exciting news for us up here.
Cointreau is a high-end triple sec, made by distilling a neutral spirit, infusing it with sweet and bitter orange peels, then bottling it at 80 proof with added sugar. People often use Grand Marnier when a recipe calls for triple sec, but it is actually a curaçao. This uses a brandy base, whereas a triple sec uses a neutral (un-aged) base. While the differences aren't dramatic in a cocktail, I find the taste of Grand Marnier too heavy for light and fruity drinks such as the Corpse Reviver #2, Margarita, or White Lady.

Lillet is a French aperitif (fortified or aromatized wine or liqueur meant to be enjoyed before food to whet the appetite) consisting of an 85% blend of Bordeaux wines added to a 15% blend of citrus liqueurs. It is aged in oak casks and has a very light and sweet taste. It can can be enjoyed straight or on ice, and is an ingredient in some very delicious cocktails. It runs only about $17 here in B.C. and you can find it in probably any Canadian liquor store. Unfortunately in 1986 Lillet changed its recipe, and is now much sweeter and less bitter than it once was.
Kina Lillet, the original Lillet, which was more bitter ("kina" as in "quina" as in quinine, which was the original bittering agent), is what James Bond asks for by name in his original drink, "The Vesper," in the Casino Royale novel. Cocchi Americano is the best approximation of the original Kina Lillet recipe and is a great product. [2013 Update: fantastic news - Cocchi products are now available in Vancouver so get them while you can!] If you have the option, use Cocchi - it makes for a much more interesting, balanced, and historically accurate drink.
If you get yourself a bottle of Lillet, make sure you refrigerate it with the rest of your fortified wines and after a couple weeks it will start to taste a little funky, so drink up!

As for the absinthe, you can use a pastis or similar substitute. This will give you the anise flavour, but like any ingredient in any food or cocktail, the better quality the parts, the better quality the whole. Absinthe has much more depth, is a little bitter, more herbaceous, and much, much more interesting. Even a few drops make a real impression on the drink, much like a bitters. A very small dash will do the trick, though rinsing the glass or even spraying the glass or the finished drink with an atomizer are more controlled ways to get the anise involved.
Absinthe is not a liqueur, it's not hallucinogenic, and it's not illegal. For more information, should you be interested, I saved all the absinthe information for another post that you can read here.
Be warned, there are no cheap options. However, if you don't drink the absinthe by itself and only use it in cocktails, your bottle will probably last a couple years because you'll only be using dashes at a time. The kinds you can find in BC run about $55-70 per bottle, and if you are going to splurge and get some, I suggest Taboo - which is made right here in B.C. in the Okanagan Valley in the traditional style with wormwood. If you're in the U.S., you have many more options, of which St. George is an excellent one.

As for the gin, any will work and will of course bring out different elements. I suggest using a London Dry style gin as these balance the easiest in shaken drinks and are what the Savoy would have been using in the 1930's. If you have options, try them all and find what you like best.
For more information on gin, check out these guides on its history, production, types, and brands.

Lastly, always use fresh juice in your drinks! Using mixers or anything from concentrate will ruin your cocktail and waste your ingredients. Lemons are cheap and you can just squeeze them by hand if you don't have any kind of juicer.

Combine all ingredients in a cocktail shaker, fill with ice and shake, then strain into a cocktail glass (double strain to get rid of any pulp).

The Time:
I'm going to go with the first publication of the drink in 1930 rather than it's earliest incarnations in 1860's.

The 1930's were very much the start of modern life was we know it. The public transportation system was implemented in London, frozen foods became commercially available, sliced bread was sold for the first time, and electricity really took over from gas power and other forms of energy. Science was moving forward faster and faster, with Pluto discovered in 1930, the Chrysler Building built, the jet engine patented, sticky tape invented, and for the first time ever, a television drama was broadcast - "The Man With The Flower In His Mouth" was shown on BBC. Unfortunately, it was also a much more depressing (note my choice of word) decade. Unemployment in the UK reached 1 million and war with Nazi Germany became inevitable. The 30's were a dramatic contrast to the "roaring" and "rich" 1920's.

In music, Bing Crosby made his first solo recording, big band swing was just about to boom, and jazz in general was becoming much more popular across the western world and evolving faster and faster. Swing music was very popular amongst young people, and because of its exciting, sexy, and up-tempo rhythm, became synonymous with dance. Swing dancing involved gyrating all over the dance floor and throwing your partner around and *gasp* moving your hips, so swing music and dancing were banned in many dance halls in both England and the U.S.. Thanks to radio, bandleaders like Benny Goodman, Artie Shaw, and Glenn Miller became house-hold names everywhere, not just dance-club-hold names in major cities.

To a lesser extent than America, jazz was happening in London too. Probably the most famous names were composer/bandleader Ray Noble, who was the His Master's Voice studio bandleader, and Al Bowlly, his regular vocalist. The latter had a very unique voice, and released over 1000 recordings from the 1920's until his untimely death during the Blitz in 1941. He was born in Mozambique, but grew up in South Africa before coming to Europe to pursue his musical ambitions, where he was asked to join Fred Elizalde's band at the Savoy Hotel. Yes, this is the very same Savoy Hotel where Harry Craddock created and served some of the most famous cocktails we know today and wrote his "Savoy Cocktail Book." Bowlly was a very important influence on vocalists, often credited with being the first "crooner," and even the first "pop star." Famous names in music were either instrumentalists, composers, or bandleaders, and Bowlly was one of the first, if not the first singer to release jazz /pop records under only his name (rather than the bandleader's name and featuring a vocalist). He was also the first singer to have his own solo spot on BBC radio.

So, for the Corpse Reviver #2, (which I suggest starting your evening with rather than your day) here is the original crooner himself, Al Bowlly - the "Big Swoon" - with Fred Elizalde's Savoy Hotel band, the way it would have been if you were enjoying yourself at the actual Savoy Hotel in late 1920's London. 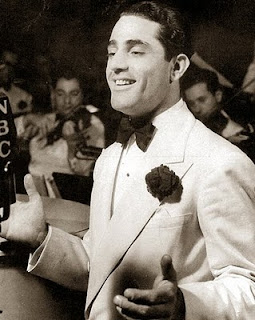