Upon arriving home from our Dine Out Vancouver visit to The Refinery on Granville, I felt I had to write a review. The Refinery is definitely one of the important names in the Vancouver cocktail scene, they've given my lady and I some great nights out, and deserve the praise.

The Refinery is an interesting place for several reasons, one of which being its location. The downtown Granville area is not exactly a great place to go for food or drink (unless you love hair-gel, buttoning-down your brightly-coloured satin shirt, pounding back Jager-bombs, and calling people "bro"), and in the middle of it all is a fantastic cocktail bar. It's hidden away upstairs - very easy to walk-by if you're not paying attention - in between the typical cheap, greasy pizza that litters downtown, boring pub food, and entertainment district dance clubs. "Redefining Granville" seems to be their tagline, and I hope they prove to be an influence. The place just looks cool (see their website), and you get the immediate feeling upon walking in that you're in for some interesting and tasty treats.

Another interesting thing about The Refinery is the fact that they makes tons of syrups and bitters in-house. Nowadays, this isn't as unique as it would have been even 5 years ago, as there are a lot of bars doing this, but the difference for me is that The Refinery really makes it work. I've been to a bar or two (with-holding names pending further judgement) that infuse, distill, etc, house-bitters, house-syrups, and even house-vermouth, but make cocktails that taste kind of boring. Too many flavours and you end up with essentially nothing, or just a Tiki-cocktail gone wrong. Too many buzz-words in a drink can turn me off. At The Refinery, however, they're using some really interesting ingredients to make ultimately very simple drinks, which is something I really appreciate. A great example is the "Miss-is-sippin'," containing Jim Beam bourbon, black currant tea syrup, lime juice, egg white, apple bitters, and topped with cracked pepper. At a glance, that looks outlandish, but it's just a Whiskey Sour with some fun embellishments, and that's exactly how it tastes. None of the creative ingredients over-power anything, and it basically tastes like a Whiskey Sour, but with touches of fruit and the a switch of lemon to lime.

Other cocktails follow a similar pattern of embellishing the classics (even including a variation on the Last Word using house-made "Chartreuse pop"), and everything we tried worked well. Some were as simple as a rum old-fashioned, but using mocha tea syrup, apricot bitters, and lime oil (rather than the usual simple syrup, Angostura, and orange oil). The only downside for us was that some of the cocktails lacked balls, as we tend to enjoy bold flavours and spirit-forward drinks, but all of them tasted great and I didn't feel like any ingredients got lost. Another very fun aspect of the cocktail menu is the "Impromtu Punch," for which you specify your choice of spirit, and the bartender will make a punch-style drink for you on the spot.

In the end, between us (and our company of two) we tried 8 cocktails, voted on them as a group to see who came out the winner, and it turned out to be the "Quarter French" with Collingwood Rye, Yellow Chartreuse, house bitters, absinthe, and chai tea syrup. It had more balls than all others we tried, by far the most interesting flavours, and remained balanced. There is also a short list of dessert-style cocktails, from thick, sweet, cream and tea drinks, to a very simple bourbon old-fashioned with coffee bitters. Both the bartenders I've had there (general manager Graham Racich, who created "The Lucky Lady" for Fernet February, which you can see here, and house 'mixologist' Joel Virginillo) are creative, quick, and skilled. While the menu is good, I suggest asking for something new and different, as they will make something up you won't expect and it will taste great.

The food, courtesy of the skilled and versatile Kirk Morrison, was delicious and diverse as well, and the servings were perfectly sized. Each dish on the Dine-Out menu had both a suggested cocktail and wine pairing - including a perfect choice of a Cynar Negroni with the spaghetti main. The Beef Carpaccio and Cinnamon Cheesecake definitely stood out for me out of everything we tried. 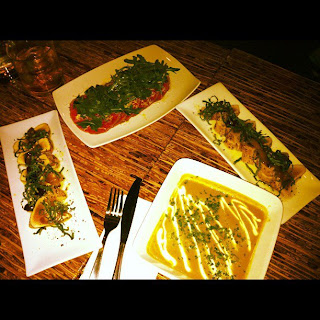 Possibly the thing I love most about The Refinery is something that may not happen again - Cocktail Kitchen. This is essentially a competition between guest bartenders, as voted and rated by you, the guest. Each month has a cuisine theme and a spirit or cocktail theme to pair. So, for example, the one I had the pleasure of trying was Flor de Cana rum vs. Tiki, and others included Chuck-Wagon Stampede vs. Buffalo Trace Bourbon, Morocco vs. Cointreau, Italy vs. Ramazzotti, etc. You get 3 (very affordable) courses of food in the chosen style, then three paired cocktails as designed and made by that week's guest bartender. After each course, you vote on the cocktails, how they paired with the food, presentation, taste, etc, and at the end of the "season" the top voted bartenders face off in a final showdown. It was a truly exciting and very fun event, and I will be very sad if it doesn't come back!

The Refinery often has special events happening, so be sure to keep an eye on their website. Currently, Wednesday nights are "Mad Hatter Tea Party" nights, where you get your choice of Beefeater 24 tea cocktails (actually served in a teapot), and 4 different bruschettes for only $30 for 2 people. That leads me to my final point: price. The Refinery is very affordable, particularly for what you get. In fact, it's possibly the best quality per dollar I've found in the city. Drinks are a little cheaper than most cocktail bars (meaning not pubs, clubs, and typical restaurants), and food is very reasonable. I find I spend $20-30 less than at other places my lady and I like to go for the same number of drinks and dishes that we usually get on a full night out, but I'm always happy with everything. It is a much more casual experience than going to, say, The West or Boneta, but that's part of its charm.

So, if you're ever looking for a place with great drinks and food that's casual and affordable, looking for a new place to see some creative mixology, or you're stuck on Granville and need some solace, definitely try The Refinery. Also don't forget to check their website for events, and especially Cocktail Kitchen in case it comes back - it's one of the most fun events I've been to food and drink-wise in Vancouver.

Thanks to Graham Racich, Kirk Morrison, Joel Virginillo, Lauren Mote (the original mastermind), and The Refinery team for a fabulous night out for Dine Out and for running a fabulous destination in Vancouver!

[[ see "The Lucky Lady" from The Refinery for Fernet February here ]]
Posted by Rhett at 18:42

Email ThisBlogThis!Share to TwitterShare to FacebookShare to Pinterest
Labels: dine out vancouver, reviews, The Refinery, vancouver