A Beginner's Guide To Bourbon Part 1: What Is Bourbon?

Arguably the most currently popular whiskey is bourbon. This probably isn't the case among experienced drinkers and bartenders, as rye is called for more often in classic drinks and often has a more complex flavour profile, and among spirit aficionados I imagine that single malt Scotch is the whisky of choice. Bourbon is popular with casual drinkers for a couple reasons: 1) it's sweeter and easier to drink than other whiskeys, 2) Donald Draper often asks for it on Mad Men, and let's face it, that show is in part responsible for more and more people getting into drinking, and 3) in Canada, good bars will serve bourbon in most cocktails because it's way more interesting and delicious than Canadian whisky, and American rye is REALLY expensive here.

((A quick note on Mr. Draper: his consistent ordering of "Old-Fashioned's" has definitely increased the number of people who order that drink when at a bar. The unfortunate part is that most bars and bartenders have no idea how to make one properly, and I'm sure most people ordering it won't know the difference either. Everyone makes this cocktail differently, but there are some definite don't's (adding soda, muddling fruit, using granulated sugar but not mixing well, not adding bitters, etc). Lastly, the original Old-Fashioned cocktail (which was a style of drink, not one drink specifically) used Cognac, then eventually used rye, then eventually typically used bourbon. That leaves us where we are today.))

What is bourbon? In my Beginner's Guide to Whiskey Part 1 we discussed how whiskey is made and where it came from, and in my Beginner's Guide to Whiskey Part 2, I briefly stated the regulations on what can be called bourbon. Here they are in detail (as stated for North America):
- made from a grain mixture that is at least 51% corn
- aged in new, charred-oak barrels
- distilled to no more than 160 proof
- entered into the barrel at no more than 125 proof
- bottled at at least 80 proof
- if aged for a minimum of 2 years, does not have colouring, flavouring, or any other spirit, it may be called "straight"
- if "straight," and aged for under 4 years, the age must be labelled
- the age stated on the label must be of the youngest whiskey in the bottle (not counting the age of any added neutral grain spirits that is labelled as "blended")
- if labelled "blended," it may contain colouring, flavouring, and other spirits, but must contain at least 51% "straight" bourbon

That's a lot of rules, right? Bourbon has one of the more detailed and strict set of regulations, but this is good, because it means you the consumer are getting what you're paying for. If these regulations don't exist, I could mix cheap vodka with my own urine, colour it brown, then sell the bottle and label it "bourbon," and if you didn't know better you'd be in for a fun surprise. This is the issue with certain products such as absinthe, where there are no real regulations and it becomes a challenge to find the real thing. 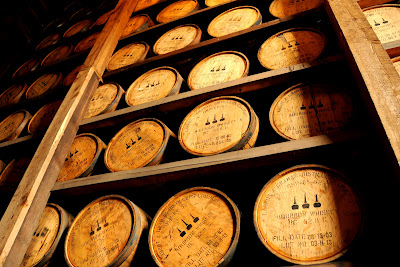 While bourbon can be made anywhere in the United States, its history began in Kentucky, and if made there, the bourbon will be labelled as such. The history of the spirit is unclear, but the typical story is that a pioneer Baptist minister named Elijah Craig distilled a corn mash and aged it in oak casks. The first bourbons were created in Bourbon County in Kentucky, and this lead to giving the spirit its name. All stories are incredulous, however, and in all likelihood people were just distilling whatever was around, and in Kentucky there happens to be a lot of corn. Spirits were being aged in Europe for at least a hundred years before bourbon made its first recorded appearances.

Bourbon is one of the few whiskeys that holds no stock in the particular age length (opposed to Scotch, for example), but rather just in acheiving a good balance of flavours. In fact, aging a bourbon too long can make a poor-tasting product. Basically all straight bourbons use the "sour mash" method, where distillers add some of the previous batch to the new batch to maintain a certain pH balance - similar to making sourdough bread.

Tennesee Whiskey is technically bourbon because it holds to all the same regulations, except of course that it must be made in Tennesee. However, as I mentioned in my previous beginner's guide, most of those distillers like to brand their product as being its own type of whiskey (plus they have an extra charcoal filtering stage).

In the next post I'll go through each type of bourbon generally available to us here in B.C. and give some tasting notes and suggestions. Then to top off our bourbon talk, I'll show you how to make an Old-Fashioned - properly.
Posted by Rhett at 16:00