6 Reasons Why Seattle Is Awesome

I recently spent three nights in Seattle with the lady and realized even more this time than my last trip that Seattle is awesome. We had the chance to hit up six bars, five restaurants, one tea service, two historical tours, two museums, a fair amount of shopping, and the Dita Von Teese show. So, all in all, a pretty fantastic vacation.

Now, there are a lot of reasons why Seattle is awesome, so the following list are just the reasons that stood out to us on this particular trip. Let this be a lesson to everyone that you should spend some time there if you can. It's similar to both Vancouver and San Francisco in a lot of ways, but also has its own vibe and some fun history as well. There is a ton of great food and drink, and a handful of exciting neighborhoods in which to spend a day. I found it interesting that it's only ten years older than Vancouver despite looking about a hundred years older, but that's because its northern sister has a penchant for destroying or rebuilding anything old which makes it very difficult to maintain any sense of history (I mean this both literally and figuratively). I don't want to digress, especially since I already shared my feelings on this on my last ShakeStir article.

On to the awesome. These are not in a strict order other than how they popped into my head.

1) Needle and Thread.
One of the coolest bars I've ever seen. While the speak-easy style of calling from the telephone at a steel door inside Tavern Law and giving your name to unlock said door so you can wind your way up a narrow staircase with walls covered in 1920's pornography may seem pretentious (like the bars of its ilk in New York), it's surprisingly friendly and warm up there. The staff were not only knowledgeable and really talented, they were very amiable and we had some great conversation along with the drinks. The decor is all Prohibition-era inspired (and I'm quite sure almost all of it is actually that old), leading to a discussion with my lady about how our entire apartment should look the same. There is no menu to speak of, so you just describe what you feel like and leave yourself in the hands of extremely skilled bartenders. The drinking highlight for me was probably my nightcap of sorts, an impromptu mini-concoction of Averna dressed in Green Chartreuse, absinthe, and lime zest oil.
Be sure to call in advance to get a seat!

2) Canon
I think my first thought when walking in was "is this for real?"
I don't think I've ever seen a spirit collection that large in my life. I tried to no avail to get a decent picture of even a portion of the sky-high walls filled with bottles, but to get an idea of the look, go watch Raising The Bar with Jamie Boudreau on the Small Screen Network (all his new episodes are filmed there).
I'd been looking forward to visiting Canon ever since it opened (sadly just after my last trip), and I was not in the slightest disappointed, nay, perhaps I was even surprised. The bartender team is an all-star lineup (featuring the aforementioned Jamie and legend Murray Stenson), the menu is crazy simple and includes a few carbonated and barrel-aged drinks, the food is affordable and seriously tasty, and the look of the place is again very antique, but very warm and covered in candles and wood. Stand-outs for me were the dessert brownie with a Fernet Branca Menta marshmellow (for real! it was so good!) and my final dealer's choice with Old Granddad 114, Bitter Truth Pimento Dram, apricot liqueur, Bitter Truth Creole bitters, and Campari. 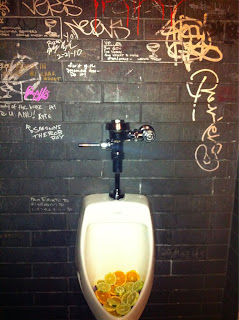 The last of my top three anticipated bar visits (again, in no order!) was again amazing. Anu put together a really great establishment that deserves all the praise it has been getting (and so does she). While you can get a more in-depth look at everything on my review for Fernet February, I feel I should also mention that the walls and bar include taxidermy (a favourite of ours) and analog stereo gear, and the men's bathroom walls are covered in drink recipes from the menu and the urinals have a fresh array of citrus slices rather than urinal cakes. Drinks were great, place is great, bartenders were super friendly, and Anu is a humble and awesome individual! Awesome all around.

4) Spinasse
The best restaurant we visited for sure. The food is very high-quality Italian, but neither the prices nor the feel of the place were both much more modest. (Don't take that the wrong way, the service was impeccable). Yet another winner in the Capitol Hill area (award-winner at that), we were left not only full but a little floored by how fantastic the food really was, and it was perfect for sharing a little bit of everything. Hand-made noodles were a highlight, but I dare say the dessert was the most memorable - sweet goat cheese mousse with rhubarb gelatina and ginger crumble. 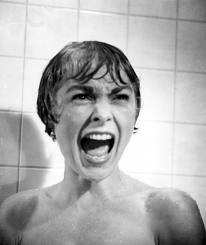 Did I mention we love taxidermy? This is a very new little shop of oddities, much like one of our other favourite shops ever, Loved To Death in San Francisco, but the biggest difference is price. I have never seen such affordable stuffed animals. If that doesn't get you excited, I understand, but we couldn't help ourselves and now have a new pheasant named Marion at home (yes, after "Psycho"). They also have lots of fun little antique and vintage trinkets, bottles, teeth, and war paraphernalia. Oh, and a human skeleton.

6) Can't Look Away - The Lure of Horror Film (at the EMP)
We actually saw this for the second time. If you're a horror fan at all, this is an absolute must (and do it quickly because the exhibit is leaving soon!), and if you're not it's still a must because it will hopefully give you a new-found respect for a very influential and often-misunderstood genre of film. Seeing Jack Torrence's actual prop axe in person is so much fun, as is listening to iconic film scores without any other sound, as is listening to some of the genre's biggest names comment on some of the biggest films. Unfortunately Eli Roth is a curator and you have to suffer through his mindless drivel and walk past his shrine to his (wait, let me count...one... right) two god-awful movies. The awesomeness of the rest of the exhibit handily outweighs anything stupid he has to say though, and the graphic design of the entire thing is amazing to the point of us wanting it on mugs, shirts, and notebooks.

Ok, so that's six already, but there were other great things on this trip alone, including Pretty Parlor vintage, Liberty Bar (which we didn't have much time at but obviously had talent and very decent sushi, if not the friendliest of service), Remedy Tea (a block from Liberty), and Arabica, which serves excellent breakfast, coffee, and even some refreshing aperitif cocktails. Capitol Hill alone is worth a day of hanging-out. Oh! And if you're also a history nerd, like we are, do the ghost and sin city tours at Pike Place Market - Seattle has some fun and bloody history worth hearing about!
Anyway, take a trip to Seattle. It's awesome.

Email ThisBlogThis!Share to TwitterShare to FacebookShare to Pinterest
Labels: seattle