Next in our little trip through Vancouver history is a cocktail with a much more elusive origin - the aptly named "Vancouver." There is no definitive record in print that I could find, no two birthdates that matched, and only one person who claimed to have the actual story behind it. I've only found one establishment in our city that actually has this cocktail on the menu, and the date they list doesn't match the only story I've found. To top it all off, despite this cocktail achieving some popularity and it being one you can order in a lot of craft cocktail bars, nobody seems to make it the same way. Needless to say, this has been an interesting journey in tracking down any information.
To start at my beginning with this drink, I first found it at West Restaurant on South Granville, which is easily one of the best places to eat and drink in the city. Award-winning veteran bar manager, David Wolowidnyk, runs a solid program focusing on an even mix of classic and simple modern cocktails using a very large selection of top-quality spirits. His "Vancouver" is full-bodied, smooth and herbacious akin to a reverse Martinez (i.e. two parts gin to one part vermouth) using Plymouth Gin, Punt e Mes, Angostura orange bitters, a little Benedictine, and a lemon twist. The menu lists the drink "circa 1966," yet no one there could tell me why.
I did a little more hunting and tracked down a story from Steve Da Cruz, one of the minds behind the reimagining of the Waldorf Hotel (home to the oldest still-open Tiki bar in North America) and also the previous bar manager at Boneta and Chill Winston, among others. Da Cruz claims to be the one to bring this drink back to the public, and while his story overall is not without some gray areas, it's the only one I can find. In his words:

"Joe Bates dresses like one of The Dirty Dozen and drinks B&B like he owns stock in the company. He's kind of like Sean Connery and John Wayne rolled into one tough son of a bitch. His ostrich-skinned boots and ten-gallon hat are as recognizable as Gassy Jack and I've seen many women a third of his age hanging on his every word - not to mention his arm. I had already been good friends with him and one day he asked me if I had ever heard of a "Vancouver Cocktail." I said "No," so he wrote the recipe on the bar napkin for me and claimed that he used to drink them at the Sylvia Hotel when he first arrived in Vancouver in 1955."

When I asked Da Cruz about the validity of the story and if he believes it himself, he replied, "The main reason I believe him is three fold - one, he's a prison minister, two, he worked at the Bowmore distillery and is extremely knowledgeable about spirits, and three, it's too damn good to have been made up on the spot." 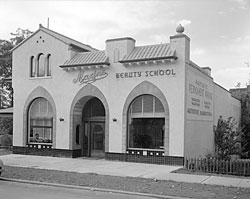 The final part to this tale is that actor Errol Flynn consumed two of this particular drink before flinging himself off the roof of The Sylvia in 1959, but unfortunately this is another false Flynn death story (others include him dying in the arms of an underage prostitute at Maxine's Hideaway in the West End, and another features his friends propping up his lifeless body in the lobby of the Hotel Georgia for fans to see). His death certificate simply indicates natural, if premature causes of death, namely a heart attack, but he did die in the West End of downtown Vancouver near the Sylvia Hotel and it is entirely possible he was drinking a Vancouver Cocktail at the time. 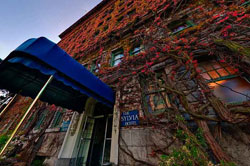 The last step of my journey took me to beautiful English Bay in the West End to visit the Sylvia Hotel itself, which, despite its hundred-year history, has fairly little to offer in a display of heritage other than its reputation. I even ended up contacting both the general manager and owner to ask if there is any record or rumour about this drink and neither of them had any idea. The hotel claims to be "Vancouver's first cocktail bar," which again didn't make sense to me because obviously Vancouverites were drinking before 1954 when the Sylvia got its license, and there are many accounts of old establishments such as the Hotel Georgia and The Cave having mixed drinks. But, that is not to say that they were serving them legally, and there is a difference between a liquor license, a liquor and dining license, and a cocktail license. I therefore can't say this is false, but perhaps a more honest wording would be "Vancouver's first legally licensed cocktail bar" - but that doesn't exactly have the same ring to it. 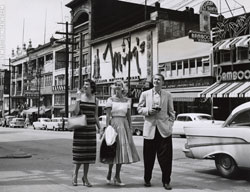 The 1950's marked a shift in alcohol culture in Vancouver, with legislation being passed to allow liquor, beer, and wine to be legally sold with food in restaurants for the first time in 1952, and in 1954 the famed musical venue, The Cave, became the first nightclub to be granted a "dining-lounge liquor license." Before this, Vancouver had sort of a twisted speakeasy-type of nightlife, with cabarets selling ice and soda while allowing customers to bring in their own concealed booze, and some nightclubs selling bootlegged liquor. Police raided establishments regularly, confiscating any visible liquor, which led to patrons pouring the booze into half empty soda bottles, or in Chinatown - teapots. More racially -diverse nightclubs on the East Side didn't get these kinds of licenses until 1969, again drawing out the post-Prohibition transition - a practice that in some ways continues even today. Is this perhaps the reason that it's so difficult to find details on Vancouver's cocktail history aside from law and distribution struggles? Or is it because it seems common practice to remove, "improve," and update all semblances of history that we have here in the city? From our oldest buildings, such as the aforementioned Maxine's Hideaway, which dates back to 1905 and has a colourful history filled with brothels and secret tunnels, to literally towing away our Trader Vic's and giving it to Victoria, it often seems like Vancouver has no real sense of history because we don't let anything get old enough to become historical. This makes our cocktail scene fascinating, as Vancouver is years ahead of any other Canadian city and many American cities and has become a recognized mecca for food and drink, even hosting Tales of the Cocktail for the second straight year (and a third one is already planned). The youngest coast of Canada with the harshest liquor laws and most expensive liquor prices is home to the biggest boom in cocktails and mixology. Strange. 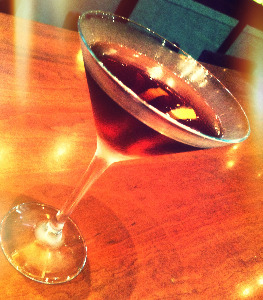 Here is Da Cruz', or rather Bates' Vancouver recipe. As always, particularly with simpler, older drinks, variations are about, so feel free to experiment. A 1:1 Martinez with Benedictine instead of Maraschino gives a sweeter, fuller drink, while the West's version mentioned above is a very balanced and soft pre-dinner sipper, and the one below is much more boozy but light. Da Cruz suggests Cinzano to let it "dance lightly," but should you decide to try a West-style one, use Punt e Mes to avoid the drink becoming too sweet.
Combine ingredients with ice, stir, serve up.
"No stupid garnish."
(Though the lemon twist on West's version was a nice addition for balance, so take this as you will).

I always like to pair a good drink with a good song, and while the 1950's marked the explosion of rock and roll north of the border, with Bill Haley and the Comets touring through in 1956 followed by Elvis Presley and Buddy Holly the following year, I am much more interested in the lingering era of music. Sticking with Bates' 1955 and the sophisticated taste of the Vancouver Cocktail, I've chosen Doris Day, whose best-selling album and most critically-acclaimed film were both released that year - "Love Me Or Leave Me." Here is the title track from this album by one of the greatest voices in American music, Miss Doris Day.