Both the Fairmont Pacific Rim and the lead bartender in its Lobby Lounge, Grant Sceney, are new additions to Vancouver. Hailing from Melbourne, Australia, and spending two years bartending on an island in the Great Barrier Reef before calling British Columbia home, Grant has obviously picked up the craft quickly and didn't waste any time making his mark on downtown's drinking scene. With a new menu focusing on both classic and modern drinks, and implementing both barrel-aging and the Perlini carbonation system, this Fairmont is already standing out. An Aviation along with a barrel-aged Rob Roy and Bijou sit next to the Seattle-inspired carbonated Corpse Reviver #2 and Sidecar, and the originals are consistent with most of the contributors in this series having a focus on the culinary approach to mixing drinks. The "Pacific Rim Sour," is a mandarin orange-infused pisco sour with a touch of hibiscus, for example, while the "Bali Hai" features pear and thyme-infused gin and a ginseng and goji berry tincture mixed with agave, lime, and coconut water. Osmanthus and jalapeno both make infusion appearances as well, as does a Hoegaarden beer cocktail with Wiser's whisky, lemon, and honey called the "Chronicle."
Likely the most interesting of the bunch, though, is the drink Grant has chosen to share today - "Seven Days in Havana." The most sophisticated of the bunch, and likely requiring more of an experienced palate than its menu neighbours, this sipper has some complex bitter character from all of Bittered Sling Peach and Pepper extract, Angostura, and Punt e mes. The unique aspect of the drink is the barrel-aged Cointreau, which sat in a 1.5L American oak barrel for ten weeks, which not only rounds and smooths the flavour, but also pairs very nicely both in flavour and intention with the aged Havana Club rum. 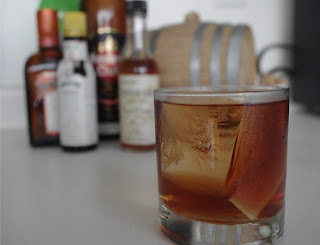 "I created the drink after returning from the Havana Club Grand Prix International Cocktail Competition in Havana, which I was fortunate enough to be sent to by Havana Club despite not competing. The name comes from the movie funded by the rum called "Seven Days in Havana," which is seven short stories done by seven different directors highlighting seven different days living in the city. I was in Havana for seven days myself, and using the seven-year-old rum all fits the name. The seven-year-old is the first sipping rum of their line and thus I created this sipping drink to accompany and emphasize the characteristics of an aged rum. The structure is based on that of the Vieux Carre, and each component and ingredient helps add further complexity and depth while maintaining the integrity of the rum.
Kale and Nori's Peach and Pepper bitters is the perfect addition, with the pepper playing on the spice element from the oak and the peach holding together the orange and honey notes from the Cointreau. A bouquet of flowers moves across the palate with an underlying subtle smoke and peat element carried through by the Laphroaig. The Punt e Mes maintains the body with its mild bitter being further emphasized by Angostura, and this quality is essential in balancing the mild sweetness from the Cointreau."

Stir with ice in a mixing glass, strain over rocks in a Laphroaig rinsed glass.
Garnish with a lemon twist.

If you're looking for somewhere new to try, or like me you're following a Bittered Sling treasure map throughout the city, make the Lobby Lounge in the Fairmont Pacific Rim your next stop.