We are seeing many modern cocktails this month, so it seems like a good time to take a quick break and see some classics. While there aren't any drinks specifically created for Halloween celebrations (or rather, any that survived the years in print), there are some with names that fit just fine with the holiday.

The most obvious of these are the "Corpse Revivers." This 'family' of cocktails dates back to the mid-late 1800's, and were designed to "revive the corpse" the morning after a night of heavy drinking. These cocktails bear little resemblance to each other aside from the name. It wasn't until Harry Craddock published his "Savoy Cocktail Book" in 1930 that any of these recipes showed up in print. The most popular is the "Corpse Reviver #2" (in my opinion the best of them), which you can read more about here in an old post. 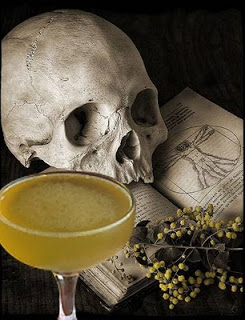 Combine all ingredients with ice, shake, and strain into a coupe.

Use Cocchi Americano instead of Lillet for better and more historically-accurate effect, as Lillet changed its recipe in the 1980's to a much sweeter version without the bitter flavour of quinine. It really makes a difference.
As for the absinthe, feel free to use pastis, Pernod, Herbsaint, or other suitable substitutions. The difference is not as noticeable as Cocchi/Lillet, but absinthe is also better and more accurate, so use it if you have it.

The other Corpse Revivers are much harder to come by. Searching in books or websites for #3 will bring you completely different ingredients, but I trust Robert Hess, who lists a recipe of equal parts brandy, Campari, and triple sec, with a 1/2 part of lemon juice. #1 is a more interesting drink, and one worth trying if you can get your hands on some applejack (which we can't in Canada): 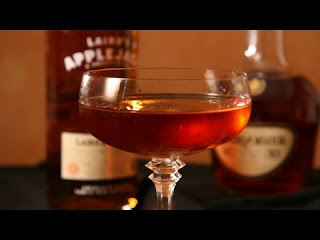 Combine ingredients with ice, stir, and strain into a coupe.

"The Savoy Cocktail Book," one of the better historical drink books you will find, brings us another cocktail suitable for Halloween and different than the usual in that it contains orange juice: "Satan's Whiskers." There are two versions listed, the "Straight" using Grand Marnier, or the "Curled" using a different orange curacao (Cointreau or triple sec works just fine in this drink as well). It is similar to a Bronx cocktail, which is just gin, sweet and dry vermouth, and orange juice without the liqueur or bitters. 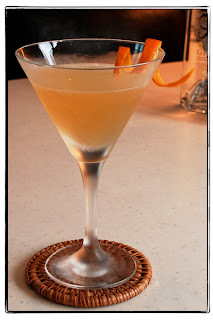 Combine ingredients with ice, shake, and strain into a coupe.

Last up is the Zombie, a drink that has sparked many a debate over the years. The original was created in 1934 by Don the Beachcomber. Tiki drinks tend to contain a lot of ingredients, which fans the flames in the recipe debate. The modern go-to man for Tiki is Jeff "Beachbum" Berry, so I will list his recipe, and I will also list Martin Cate's from the best Tiki or rum bar I've ever been to - Smuggler's Cove in San Francisco. Martin's recipe is essentially the original. (For more ideas, Gary Regan, Dale Degroff, and Dr. Cocktail have all come up with recipes too).

Shake everything with ice except the 151. Pour into a tall glass, fill with ice, and float the 151 on top. Garnish with a cocktail cherry, pineapple slice, and a sprig of mint if you desire. Sprinkle powdered sugar on top.

In a blender jar, add all ingredients and blend until slushy, about 2-3 seconds. Pour contents into a zombie or pint glass and add more crushed ice to fill. Garnish with a sprig of mint.