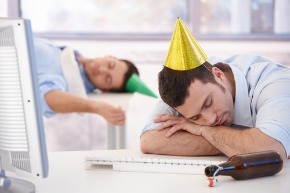 Hangovers suck. If you're like me, you love to drink but you don't like getting drunk and you hate getting sick or hungover. The key to drinking without encountering these problems is not just moderation - it's strategy. First, let's look at the causes of a hangover, and then some ways to avoid one. The interesting thing about this topic is that there is a lack of cohesive and definitive research on the matter.
Here’s what we do know:
- Booze contains ethanol, which is a poison. Drinking it is bad, but it just feels so darn good, so let's move on.
- Ethanol, being a poison, or "drug," will create biochemical dependencies and therefore cause withdrawal when removed from the body. This can be attributed to some hangover symptoms, from mood swings and headaches to indigestion and body temperature issues.
- Ethanol is a diuretic, meaning it increases urine production in the body, using up water and causing dehydration. This can have unpleasant consequences, from thirst and lethargy to dizziness and headaches.
- The liver is responsible for breaking down ethanol, which in turn creates even more toxic substances that can inhibit other processes in your body, such as the Citric Acid Cycle. This causes fatigue, moodiness, and lack of concentration.
- About 20% of the alcohol you drink will be absorbed into the bloodstream in the stomach, and the remaining 80% will be absorbed in the small intestine. You could be a lot drunker later than you are now.
- The stomach absorption causes the lining to become inflamed and both the stomach and pancreas overproduce digestive chemicals, leading to nausea and sometimes vomiting.
By combining the above information with personal experience, I've come up with some rules to preventing hangovers that are hopefully helpful to the drinkers out there who don't have the luxury of sleeping one off.

1) Eat
Seriously. This is the key to keeping alcohol in check. Scientifically speaking, alcohol is metabolized slower in the body if it has to compete with food - specifically fatty food. The longer your body takes to process what you eat, the longer it will take to metabolize your booze as well. If you are going to drink at all, make sure you eat something and if you plan to drink a lot, make sure you have a big meal beforehand (with lots of protein and fat). If you’re feeling more tipsy than you’d like, have a snack.

2) Drink Water
As mentioned above, dehydration is a key part of a hangover, so hydrate yourself. You should be drinking at least one glass of water per alcoholic drink and more when you get home. If you're not getting up from the bar to pee at least a couple times during your stay, you're doing something wrong. (Bartenders, this is a lesson for you too: make sure your guest has a full glass of water at all times.)
3) Know your limit
Cliche, yes, but everyone would stop mentioning it if people didn't suck at it. A good tip here is not to measure in the number or types of drinks, but know exactly what your body feels like through each stage of drunkenness. It's dangerous to say you're fine with three cocktails because you're counting glasses rather than keeping track of what you ate that day, how much water you're drinking, and the exact proof of your drinks. Be aware of exactly how your body feels when you're warm, tipsy, drunk, and when it's time to stop.

4) Understand what you're drinking
Know that a sleeve of beer, a glass of wine, and 2 oz of 80 proof spirit have basically the same amount of total alcohol. Knowing this, though, keep in mind that a sleeve (about 16 oz) of beer also contains a lot of water and takes considerably longer to consume, and therefore will get you drunk slower than doing a couple shots. Pay attention to the alcohol content of what you're drinking; for example, ordering Booker's at 130 proof will mess you up faster than ordering Jim Beam at 80 proof. A lot of European beers are higher proof than American products, a Cabernet is higher than a Pinot Gris, and so on, so pace yourself accordingly. Sip cocktails, don't chug them, and drink a glass of water in between each shot. Remember that alcohol isn't absorbed all at once in the stomach, so sometimes you can get hit in an hour from what you’ve had despite feeling fine right now.
Another tip here is to be honest with the bartender. If you really want another but you're close to your limit, tell him/her just that and ask for something low-proof.

5) Don't drink cheap liquor
Most establishments you visit will be using the cheapest possible liquors in the wells, and while that's great for profits it's bad for your body. For example, Tequila is only made from 100% blue agave if stated so on the label, and the cheap Tequilas you'll find in most places only have to be 51% agave by law, which means the rest is made up of cheaply produced neutral spirits, sugars, colouring, and even flavouring. The same goes for blended Scotch and Canadian whiskey, the latter of which often contains sugar, colour, and flavouring. A consistently safe bet is American whiskey, which has stricter laws; even the crappiest American whiskey is much higher quality than bad Tequila, Canadian, Scotch, or vodka. Those of you who think vodka is a safe drink, be aware that not every country has laws governing how it's produced and there are no laws against additives. Cheaper spirits use cheaper components and processes, which brings with it bad byproducts, so the better the quality of spirit, the better the drunk.  If you've been drunk off good whiskey and can compare that to a cheap Tequila drunk, you know what I mean. If you’re doing a shot, it’s probably cheap liquor. Consuming better quality spirits will help you drink slower (because they won’t be served in a shot glass and you’ll usually be paying more and will therefore appreciate it more).
A note to the above: just because something is more expensive does NOT mean it's better quality. It helps to do your research, ask knowledgeable bartenders, and try lots of products - you'll be able to taste the difference eventually. Many spirit companies spend a lot more on marketing than on production, and just because the bottle is on the top shelf doesn't mean it deserves to be.

Take these tips to heart (or write them on your hand if you're going drinking because you'll probably forget by the time it’s too late), and I'll be back soon with a discussion of alcohol's immediate effect on the body as well as some information on the "congener" debate.
Posted by Rhett at 10:19