Winter Cocktails: "Cold & Delicious" from The Violet Hour in Chicago 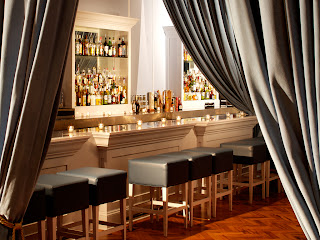 Now that we've seen some history on eggnog, we can try some modern variations. Today's contribution is from a new bar and a new city to the site: The Violet Hour in Chicago. Touting not only a sophisticated and solid cocktail menu and program, the design of the place itself is designed to showcase a partitioned bar and the bartenders themselves. As they explain on their site, "the early 19th century English club and French salon were the beginning of the modern venue for socializing and drinking" and the space takes inspiration from this era. It uses partitions and high wing back furniture to "create places of intimacy conducive to the art of conversation."

The house rules include not only wearing proper attire, but refraining from cell-phone use and serving Jager-bombs, Grey Goose, and light beer. Drinks for the most part showcase the flavours of the spirits, while using interesting bitters (like Root Beer), amari (like Abano), and the occasional fruit syrup and preserves.

I'm excited to have such a great establishment from such a beautiful city contributing to the site this winter. Bar manager Robert Haynes has passed along The Violet Hour recipe for their "easy and fun alternative to the bad eggnog that permeates the holiday season." Sticking with a more English-style, they adopt Cognac and port but also add Christmas spices, walnut, and apple flavours to the mix. 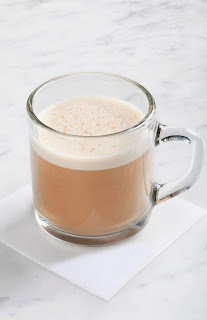 Combine all ingredients in a shaker.
Shake vigorously to incorporate egg.
Add ice, shake and strain into a rocks glass.
Top with grated cinnamon.

As for the apple bitters, there are some available, but making bitters at home is not as complicated as one might think. I'm currently tweaking my own apple bitters recipe, which I plan on sharing here in the near future. The idea behind any bitters recipe is simply to steep herbs and bittering agents in a high-proof alcohol. That makes it sound a lot easier than it is, but experimentation is the fun of the process.

Thanks to Robert and The Violet Hour! Cheers!