The Cold, Hard Truth About Ice

How much does ice really matter?

While the average person might say “not much,” the average cocktail bartender will – with eyes widened – exclaim: “SO MUCH.”

So allow me, as a bartender, to nerd-out and give a full explanation as to why this is the case.


Ice, for all intents and purposes, should be considered an ingredient in the creation of a mixed drink, and like any other ingredient should be of the highest quality. A drink is only as good as its lowest-quality ingredient, so yes – ice quality matters a lot. 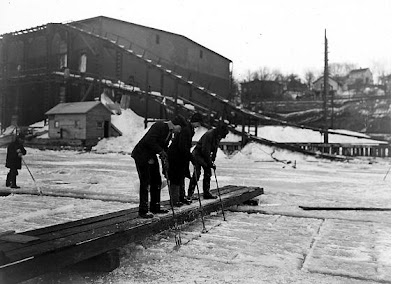 In the golden age of cocktails (the mid to late 19th century) ice was harder to come by as refrigeration technology was new to non-existent (depending where you lived). Only the best of establishments had the best of ice, usually delivered in large, very cold blocks from which the bartender would chip off clumps with an ice pick. This made well-crafted cocktails much more of a valued commodity than they are today. As ice became a taken-for-granted part of everyday life, and as the skill and art behind making cocktails disappeared, bars just began to use whatever was cheapest and easiest. This meant small, watery ice, and the drinks suffered (and still do) because of it.

To understand exactly why, let’s consider the purpose of ice in mixing drinks:

- it dilutes, softening the edge of the alcohol by lowering the proof, allowing flavours to combine with each other more easily

- it chills, lowering the perception sweetness, bitterness, and viscosity, all contributing to a better-balance of flavour, and a dry rather than sweet drink

and less importantly,
- in the case of egg or cream, it emulsifies ingredients, creating texture that both mutes the flavour of alcohol and increases the perception of sweetness, allowing for less added sugar

Given the above, ideally the ice should chill the drink as much as possible before over-diluting it. This means the optimal ice is as big, cold, and hard as possible to allow for the longest shaking or stirring time before the perfect amount of dilution is obtained. (Never trust a drink that only gets a few shakes or stirs before being served). Skimping on ice is the equivalent of skimping on ingredients – using the lowest quality of what’s available to save on costs means the drink quality will suffer. In fact, it’s even more important, because a Manhattan with a great whiskey, for example, can be ruined by adding too much water.


So what can be done about this to ensure the best ice? Most of the best cocktail destinations use a Kold Draft machine, which ensures large cubes that are colder, higher density, and more pure than any other machine. The high-pressure water injection system freezes out impurities, the cube-shape and cold temperature help make drinks as cold as possible, and the density of the cubes allows for slower dilution – again helping with temperature and allowing us more control when mixing. This also means anything enjoyed on the rocks isn’t a watery mess.

Nerdy, right?
Yes, but attention to detail is what makes the best food and drink, and ice-quality is an extremely important but often overlooked detail.

[post originally published on pourhousevancouver.com]
Posted by Rhett at 23:25