Today's cocktail is coming to you from Italy. It's an old one that gained popularity later on with American tourists and was renamed to honour this. It contains only three ingredients, one being soda water, and the other two being classic Italian drinks - sweet vermouth and an amaro. Further evolution of this drink led to the addition of gin, a variation named The Negroni, which is the next cocktail we will be visiting.

But for now, here is a very old Italian cocktail enjoyed in its peak of popularity around 1910 - The Americano. 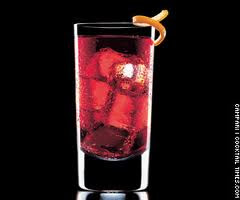 In 1860, Italian Gaspare Campari invented a recipe for an amaro (aptly named Campari) that quickly became very popular all over Italy. Soon after, he married, settled down, and opened a cafe called... well... Caffe Campari. There he invented the signature cocktail of his aperitivo, and called it the "Milano-Torino." Milano because that's where Campari was made at the time, and Torino because that's where Cinzano sweet vermouth was made at the time. In the early 1900's, there was an influx of American tourists into Italy, and many of them fell in love with this drink (of course increasing the sales of both the Milano-Torino and Campari), and in honour of this the cocktail was later renamed the "Americano."

(Interesting sidenote: the first drink ordered by James Bond in the very first 007 novel - "Casino Royale" - is an Americano).


The recipe is simple, and the ingredients are easy to find.

Combine:
1 part Campari
1 part sweet vermouth (Cinzano Rosso to be traditional)
in an old-fashioned glass over ice,
top with soda, or simply add a dash - depending on your taste -
and garnish with an orange slice, orange peel, or lemon peel, or all of the above.

The flavour of campari is unique, but very bitter. If you really hate bitter flavours or herbal flavours, you won't like this drink, however, the bitterness is muted by the sweetness of the vermouth, as well as by the acidity of the soda, and the dilution of both the soda and ice. It's a great drink with which to develop your bitter palate so you can better enjoy amari and their respective cocktails. The Americano is a refreshing afternoon-sipper, or pre-dinner aperitivo, whereas the Negroni is stronger, and typically served up (which I will discuss in its own post).

Sweet, rosso, red, or Italian vermouth (all the same thing, just different names) is a fortified wine (meaning that an alcohol of some kind is added to the wine during or after fermentation, resulting in a higher alcohol content and usually a higher sugar content) that has been flavoured or infused with various herbs, roots, barks, and spices. There are two general kinds of vermouth - French (or dry or white/blanc) and Italian. The former is lighter in taste, colour, and is less sweet (or more "dry"), and the latter has a darker colour and taste, and is much sweeter. Vermouths have a slightly spicy, very herbal and wine-like taste, and require a particular palate to enjoy alone. It is key to always have fresh vermouth, as it is a wine and must be refrigerated and only kept for a month at the most, and it also key to choose a decent brand (I personally despise Martini & Rossi, but love Dolin, Vya, and Carpano Antica). Most people who say "I don't like vermouth" (and I was one of them for a long time) are either drinking vermouth that has gone bad, or just drinking a bad vermouth. Have a sip from a fresh bottle of Antica and you'll see what I mean.

One or both dry and sweet are essential in your home bar, as they're key ingredients in hundreds of cocktails, and the nice thing is that they're easy to find and they're cheap. There are some great ones that are very hard to find, if you can find them at all in Canada, like the aforementioned Dolin or Vya or Carpano Antica, but Cinzano Rosso gets the job done, and will cost you just $13 for a 1L bottle. I don't recommend Martini & Rossi, but you can get small bottles for $8, and there are some reputable bartenders and cocktail bloggers who often use it.

Again - ALWAYS refrigerate your vermouth, and you'll need to get rid of it after a month or two because it will go bad. (You can see my little rant on vermouth here). 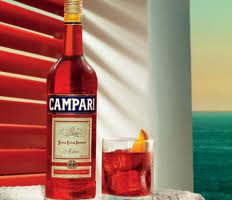 Campari is an amaro, or an Italian bitter liqueur, though it's often not listed as one. It's made from a secret recipe of at least 60 different herbs, spices, and wood barks that are added to alcohol, water, and sugar. The distinctive red colour comes from carmine dye, which originally came from crushed cochineal insects. It became wildly popular shortly after its invention in the 1860's, and continues on today as a popular aperitivo, cocktail ingredient, and has been named one of the top twenty liqueurs in the world. As mentioned, the flavour is very unique and very bitter, with hints of spice, strong herbal character, with a definite bitter orange taste. It's fun to mix in cocktails, but it's also delicious just with a bit of soda water or orange juice. You can find it in the government liquor store for $27 for a 750mL bottle, which is actually cheaper than in Washington (yay!).


The History
Italy in the early 1900's was somewhat of a mess. It was only in 1861 that the separate states were unified, and only in 1871 that Rome was made the capital. There was minimal support for any kind of government, as the Pope told the populace not to vote due to all the land the church lost during unification. There were few natural resources, large debt, and almost no transportation or industries. Poverty, illiteracy, and taxes were high. The country was fairly split between north and south in terms of most everything; the north was becoming industrialized and wealthy, while the south remained poor and underdeveloped, which lead to a lot of crime and brutal government retaliation. It was definitely a terrible time. Leading up to World War I, some progress was made, but then unfortunately military and political affairs were mishandled, in part leading to the death of about 600,000 Italians during the war.

There were a lot of American tourists visiting northern Italy during these tumultuous times, coming to calmer, developing northern cities like Turin, Milan, and Rome. In art, futurism was blossoming, and the popularity of opera continued its reign from the 19th century. Verdi and Puccini were icons, with pieces such as "Madama Butterfly" and "Tosca" by the latter composer premiering in the early 1900's. Throughout the 1910's, foreign music (particularly early American jazz) was making its way into Italy and influencing new generations of musicians, but in the 1920's the fascist government put a ban on all foreign art, prompting many an artist to leave the country.

For the music today, I'm going with Puccini. Verdi is arguably the more interesting composer and more important name in Italian and classical music history, but he died in 1901, so Puccini is better suited to the time-frame of the Americano's hey-day.
Sip your Americano, imagine yourself sitting at a cafe on the streets of Milan in the early 1900's, and enjoy this excerpt from "La Boheme" by a great Italian composer, Giacomo Puccini, as sung in 1906 by one of the most famous Italian opera singers of all time, Enrico Caruso. 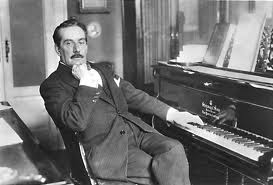