First came the Americano, but it just wasn't stiff enough for some, so next came the Negroni. 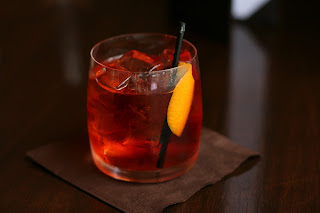 The Negoni was supposedly invented in Florence, Italy, in 1919 at Caffe Casoni when Count Camillo Negroni asked the bartender, Fosco Scarselli, for a stronger version of his favourite cocktail, The Americano, by adding gin instead of soda water. So, Scarselli made the switch and added an orange garnish rather than the usual lemon to soften the new mixture. The drink became popular and the Negroni family actually started producing a pre-mixed version called "Antico Negroni 1919," which is still made but with a different recipe.

The drink became popular outside of Italy when Orson Welles, while working in Rome on his 1947 film, "Cagliostro," spoke to reporters about his new favourite drink, saying "the bitters are excellent for your liver, the gin is bad for you. They balance each other."

The Negroni is considered one of the greatest classic cocktails, and like the others on that list, it's extremely simple in its ingredients and perfectly balanced (if made right).

There are many ways to enjoy it, but I don't agree with adding juice so as to hide the flavours. I think this is yet another compensation for people not developing the bitter palate and adding more and more sugar and fruit. Too much sugar ruins cocktails, and one as complex and interesting as the Negroni should have nothing of the sort added! There are also numerous bartenders of great skill and reputation that substitute Aperol for Campari, or use some of each in varying proportions, which leads to a more palatable and less bitter drink. While often delicious, and something I often experiment with at home, this is not a Negroni and should not be named as such.

The two classic ways to enjoy it are:

a) The Italian way, which is to serve the drink in a short glass over ice so the drink stays cold and the flavours develop,

b) The American way, which is to serve the drink straight-up in a cocktail glass. This makes a much more stiff and bitter drink and is still fantastic, but it is an Italian drink and the Italians do swear by their recipe... so I'll stick with them for now.

1 part Italian vermouth (Cinzano Rosso would be fitting, Carpano Antica would be very fancy, Punt e Mes works wonderfully but makes a more bitter cocktail, but really any kind will do - experiment! Also see my previous post on the Americano)

1 part Campari (see my previous post on the Americano)


a) build in an old-fashioned glass over ice and stir, or


b) add all ingredients with ice, and stir for 30-60 seconds to taste, then strain into a cocktail glass.

Garnish with orange zest, or lemon will do nicely as well, depending on your taste. Orange oil is much sweeter and will soften drinks, while lemon is more aromatic and excellent for balancing stronger flavours and smells.

1940's Italy was a very different time than the early 20th century when the Americano was gaining popularity. The 1940's were really the start of an artistic renaissance for Italy after leaving the clutches of Nazi Germany and Moussolini's fascist regime and allowed to both experience foreign art to a full extent and explore new ideas freely. A renaissance of film-making was occurring in the 1940's with a new generation of directors who started a new movement called Neo-realism, whereas almost no film at all was produced over the previous 20 years. The music scene in Italy was very interesting because during the fascist era throughout the 20's and 30's, there was a lot of censorship of both foreign art, but also of Italian art if it was deemed "insufficiently Italian." Certain composers were even kicked out of music schools or attacked on the street if they didn't include fascist songs into performances and compositions. Opera, which had been Italy's musical identity for almost 200 years, continued to have an influence on new popular music. Folk, classical, and jazz were incorporating operatic ideas and melodies, and big bands were even playing opera pieces. Jazz (from America) had already infiltrated Italy and most of Europe in the 1910's via James Reese Europe (a very important yet often unknown name in the history of jazz), and again in the 1930's when Louis Armstrong was allowed to tour.

A particularly popular swing/pop group named Trio Lescano (sort of the Italian response to the Andrews Sisters) was extremely successful in Italy in the 1930's until the late 1940's. Interestingly, they were actually sisters but were Dutch, not Italian, and changed their names to suit the Italian swing they were singing. They became so popular that even Mussolini recognized them on the street, and in 1941 were offered Italian citizenship. Sad were the times, however, and because of their mother's Jewish origins their radio shows were cancelled, they were stripped of their citizenship, arrested, and imprisoned on the grounds that their songs contained hidden messages for Italy's enemies. After the war, they performed one last time on radio in 1945, then disappeared to South America.

Enjoy your Negroni, perhaps the Italian way, while listening to one of the most popular European pop groups of the 1930's and 40's: Trio Lescano.