I'm excited to present a series this month just on Fernet! This amaro is a very difficult flavour to mix, the challenge of which is probably the reason why it's started popping up on cocktail menus everywhere. It can very easily overpower over flavours, and as such there are very few cocktails where Fernet contributes without dominating. Therein lies the challenge for this month's series.
I've asked all the best bars in the Pacific Northwest (so, Vancouver, Seattle, and Victoria) to contribute a cocktail recipe that uses Fernet without letting it overtake the other ingredients.
A couple times per week I will post a new recipe, each originals from a different bar and will accompany a short feature on the bartender who created the drink, and the bar itself. In the end we'll all have some delicious recipes to try at home, and hopefully some new places to go and try these cocktails!

To start, here's some general information on Fernet for those of you who are not familiar: 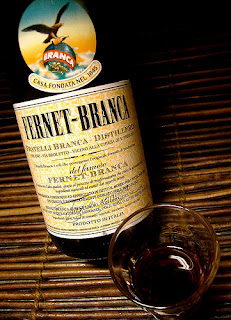 As I discussed earlier in the 20th century Italy series, an amaro is a bitter, Italian liqueur made by macerating herbs and roots in a spirit, then adding sugar and often colour before bottling. Fernet is a type of amaro that varies brand to brand, but most infuse a neutral grape spirit with rhubard, chamomile, cardamom, myrrh, aloe, saffron, and even interesting ones like St. John's wort, wormwood, bay leaves, quinine, ginseng, and echinacea. Typically amari are served as digestifs after a meal to aid digestion, and Fernet in particular is a very popular home remedy for indigestion, menstrual cramps, and hangovers.
The most famous of Fernet amari is Fernet Branca (in fact the only one I've ever seen in person), which was created in 1845 by an apothecary in Milan, Italy, and the exact recipe has been hidden ever since. Saffron is an important and obvious ingredient, as the company that produces it, Fratelli Branca, is the largest consumer of saffron in the world, using 75% of the worldwide output. Other rumoured ingredients of Fernet Branca include rhubard, cinchona bark, gentian root, wormwood, bay leaves, safe, peppermint oil, galanga, zedoary... the list goes on.
As with all other bitters, it was originally designed for medicinal purposes, and went as far as being adpoted by Italian hospitals as somewhat of a cure-all. The medicinal legitimacy of bitters have for the most part been disproven with the development of science, however, the easing of stomach ailments, including hangovers, still remains a use of bitters and, in particular, Fernet Branca. Seriously, have a little club soda with a couple dashes of Angostura or 1/4-1/2oz of Fernet and you'll be surprised at how much your stomach calms down. If you want to pick up a bottle, it runs $30 or so and can be easily found at most liquor stores. This will last you a while too because you'll use very little of it in cocktails.

Fernet is most popular in Argentina, where it's usually mixed with Coke, and San Francisco, where it is unfortunately a shot of choice among burley, chest-shaved, silk-shirted, hair-gelled, bros of the frat-boy persuasion. I often have interesting discussions with my brother, who lives in San Fran, about Fernet. I enjoy it with club soda, and some specific cocktails, but he feels it overpowers every cocktail, and I'm sure has a negative view of it because of the crowd with which it is popular. San Francisco in fact has the highest per capita consumption of Fernet Branca.

The taste is very harsh and medicinal, but also very complex and interesting. It's not nearly as harsh as people often say if you look at discussions online, which I'm sure is a palate-development issue. I think because the flavours are so strong, bartenders everywhere view it as an immediate challenge, which is why it's recently become such a popular ingredient. I've had many Fernet cocktails, but there are very few I feel really work. That's really what I want to share this month.
I think the mistake that bartenders often make in using it is that it is a bitters and should be treated as such, rather than treated as a liqueur. Other amari, such as Averna or Ramazzotti, can be used in larger portions in a cocktail and add herbal complexity without taking over, but if Fernet has more than 1/2 ounce, or even 1/4 ounce, can completely dominate the flavour profile of the drink.

I will begin our "Fernet February" series tomorrow with one of the most unique cocktails I've ever tried, "The Bittercup," courtesy of one of my favourite bars ever, Pourhouse in Vancouver! See you then...