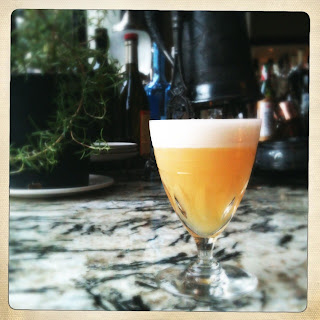 Next we trek across the ocean to Victoria where seasoned veteran and CPBA Vice-President Simon Ogden at the Veneto Tapa Lounge shares his rendition of fall, employing spice, fruit, and smoke.

Simon explains:  "Named in honour of the great Jazzman, this cocktail is what I imagine Louis Armstrong's voice tastes like. Honey and smoke, with autumnal bitters providing the bass notes. A twist on the classic whiskey sour."

Shaken thoroughly and strained into a chilled glass. Finished with a spritz of Ardbeg.

Later this month as part of the fall series I will be offering a couple recipes for bitters, including apple, so keep this on your to-make list until then.
Another great option is the "Crabapple and Cardamom" Bittered Sling Extract by Kale & Nori. Click here for a list of current retailers for their products.

Also be sure to check out Simon's previous contributions to this site:
"The Cherry Bob-omb" for Maraschino March
"Barjonesing"

We are creeping closer to Halloween and starting next post the drinks will begin to get ghoulish, bloody, and generally more scary...