Next up is the always creative and lovely Evelyn Chick, who previously contributed to the Bittered Sling series in the summer (which you can see here). Now you can catch her at the Blue Water Cafe in Yaletown of Vancouver.

Evelyn is sharing a unique cocktail combining some unsuspected elements, namely amaro and sparkling wine. Both port and allspice make appearances, lending some harvest flavour to the mix and further complexifying (yes, I just used that word) the herbal depth of the amaro combination. Caramel and coffee play with artichoke and bitter herbs and are balanced nicely by the dried fruit flavours from the port and the mulling spices of the syrup. Evelyn introduces it herself:

"This is the best way to make bubbles winter-appropriate. There was once the infamous Mr. Jay Jones sitting at my bar asking for something "bitter and bright," and immediately the challenge comes with how I can make two conflicting concepts work - bringing in 3 different types of herbaceous ingredients to balance out a light, bone-dry cava. It's the perfect aperitif, and the perfect after-dinner drink. Bon apetite!" 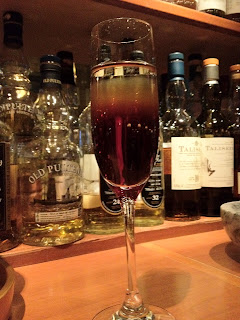 All-Spice Syrup:
Boil a tablespoon of crushed allspice berries, one stick of cinnamon, and three cloves in one litre of water. Simmer for 15 minutes on low, then add two litres of sugar. Stir until dissolved, then let cool before bottling.

The Fall Cocktail Series
You can see the series introduction here
and more terrible Halloween cocktails here
"Death & Oranges" by Donnie Wheeler
"The Satchmo" by Simon Ogden
"Dark City" by Jay Jones
Classic Halloween Cocktails
"The Giant Huntsman" by Lauren Mote
"The Bay Harbour Butcher" by Shaun Layton
"A Nightmare On Juniper Street" by Shea Hogan
Posted by Rhett at 13:02