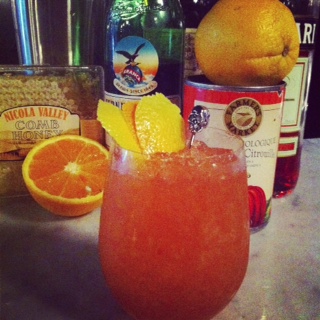 To kick things off for this fall series we are heading to Vancouver for a delicious pumpkin cocktail from Mr. Donnie Wheeler. He brings over fifteen years of experience in hospitality, bartending, and consulting for the likes of Cin Cin, Legacy Liquor, Corner Suite Bistro, and Donnelly Group bars Killjoy and Clough Club. Known to many in Vancouver as Donnie Bahama or Mr. Tiki, he runs Tiki Tuesdays at Clough Club (where each week they feature new drinks from Jeff "Beachbum" Berry's books), as well as giving seminars on Tiki history and culture at Legacy and festivals like The Art of the Cocktail.

Donnie is sharing a perfect example of a seasonal and themed cocktail that is both tasteful and tasty. (Apologies for the lateness on the Thanksgiving theme). I will let him introduce it himself:

"As it is Thanksgiving, [the drink] should be about family... in this case the Corleone family from the Godfather films. In the films every major death is preceded by an appearance of an orange in one way or another. [SPOILER ALERT]
Don Corleone buys oranges right before he is shot and falls into an orange cart. Sonny drives past an advertisement for Florida Oranges before he is assassinated. At the Mafioso summit, bowls of oranges are placed on the tables - specifically in front of those Dons who will be assassinated. Michael eats an orange while discussing his plans with Tom. Before Don Corleone dies he puts an orange peel in his mouth to playfully scare his grandson. The list goes on. So, the cocktail is a little morbid, a little seasonal, and about family."

Pumpkin/Honey Syrup:
Add 2 parts honey and 2 parts water and bring to a boil. Add 1 part of pumpkin puree and stir until mixed.