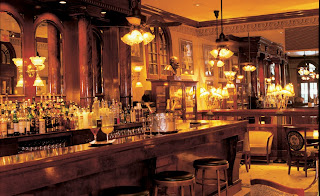 It is with great appreciation and honour that I present a whopping total of four Christmas cocktails from the historic New Orleans bar, the French 75. The bar itself was built in the late 1800's, but was renovated in the 1970's, and reinvented in 2003 with an emphasis on premium spirits and cigars, and of course the new renaissance in cocktails. This award-winning bar is the first in New Orleans to grace this site, and they have graciously contributed a handful of recipes.

"The Winter Waltz," a rye, amaro, and Christmas spice mix, is named after head bartender Chris Hannah's favourite Frank Sinatra Christmas Carol. "The Contessa" is a nod to the character in Tennesse Williams' novel, "The Roman Spring of Mrs. Stone." Contessa was the swindler in the book who introduced the Negroni to the characters in tho novel.

Build like and Old-Fashioned in a rocks glass with ice, garnish with an orange peel and a cherry.

Shake with ice, strain into chilled cocktail glass, garnish with an orange peel.

(We make the Cranberry cordial similar to making Cranberry Sauce)

A fairly simple alternative to making a cordial is making an infused simple syrup. By adding equal parts water to sugar (usually 1 cup) and adding fresh cranberries to the mix once the sugar dissolves over low heat, you can make a cranberry syrup to use in this and other similar Christmas cocktails).

Build in a tempered glass or mug, stir and garnish with grated cinnamon and nutmeg.

Pumpkin butter is a compound butter with added pumpkin puree.

Cheers to the French 75 team and their amazing bar in such a historically exciting city.
Merry Christmas everyone!