So, here we are at the end of Fernet February. Some of you might be saying "thank god," but I learned a lot about balancing powerful flavours, and it's been a ton of fun touring around Vancouver tasting new originals. It's also been fun seeing how excited so many skilled barmen, barwomen, and mixologists (whatever they prefer) are about Fernet as an ingredient. Out of the 10 bars in this series, 5 of them wanted to contribute because they "love Fernet."
I really hope to do another one of these series in an upcoming month, so please if you're reading, look to the top right of this blog page and vote on what ingredient you'd like to see in the next series!!


We'll cap things off with a classic cocktail, this time hailing from New York in the late 1940' - The Toronto.

[[ I am editing this a few month's later now to make some historical clarifications. At Tales of the Cocktail this year (2012), four B.C. bartenders will be presenting on four Canadian cocktails - The Caesar, The Vancouver, The Hotel Georgia, and The Toronto. This prompted me to track down who was working on it and engage in a little discussion being of the mind that it is not a Canadian drink. The man presenting it, the man behind the bar at Clive's Classic Lounge in Victoria, Shawn Soole, gave me some great info:
- David Embury's publication does call for "Canadian Whisky," when I was under the impression that it called for simply "rye whiskey," which in 1940's New York would have meant straight American rye.
- Shawn informed me that the Italian population boomed in Toronto in the 1920's, and of course they would have brought things like amaro with them - to which I argued that the same happened in New York quite a while before that, and that there was also an influx of Canadian whisky to New York in the 1920's (Prohibition), so nothing can be pinpointed here. This could just as easily explain Embury's recipe being from New York as him finding it via Toronto.

Here's what ultimately finishes the debate:
- Shawn and Solomon Siegel tracked down the 1922 publication of "Cocktails and How To Mix Them," finding mention of a "Fernet Cocktail," with Cognac or rye whiskey, Fernet, gum syrup or sugar, and Angostura bitters, with a lemon peel garnish. Underneath the recipe is written "this cocktail is much appreciated by the Canadians of Toronto." Being a good twenty years earlier than Embury's book, this is definitely the winning argument in naming the Toronto as a Canadian cocktail. Interesting, though, that Cognac is listed first, with the suggestion of just "rye whiskey," which brings me right back to my original thought that the intention was not to use Canadian whisky. Robert Vermeire, the book's author, is from London and published his book there, so the use of the word "rye" would likely be the American one (i.e., actual rye grain whiskey, and not just Canadian whisky). Regardless, the earliest mention says it's from Toronto, so I'm proud to say that we Canadians can claim a great cocktail.

In terms of how to make it, if it was made in 1920's downtown Toronto, Gooderham and Wort would have most likely been the Canadian whisky used, which Shawn calls a "big, ballsy, old-school whisky." Today, he recommends Forty Creek. I always lean to American whiskey, and the best one I've had is with Rittenhouse Bonded straight rye, so that is my recommendation.

Please enjoy the rest of this unedited post, but take it with a grain of salt given this new information. Cheers! ]]

So, the drink itself seems to have no particular history that I can find. No exciting story, no explanation behind the name. The first record of the Toronto is in the first publication of David Embury's cocktail book in 1948. Embury was an American attourney, but also a humble and very skilled and knowledgeable barman. His book "The Fine Art Of Mixing Drinks" is very influential even today for its basic categorization of drink types, ratios, and "rules." Cocktails are either aromatic or sour, and ingredients are either the base, the modifying agent, or the flavouring/colouring agent. He stated the general sour ratio of 1:2:8 for sweet:sour:base, which I discussed previously in the Sidecar post. His basic principles, and list of basic drinks set a solid framework for any future bartender to experiment, and his book is one of the quintessential bartending tomes, along with those of Harry Craddock and Jerry Thomas. 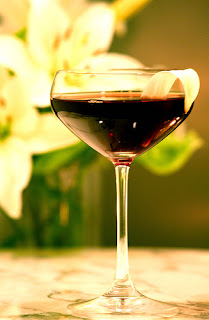 Combine ingredients, add ice, stir, strain into a cocktail glass and garnish with a lemon or orange zest. The orange might make the drink a little too sweet, especially if you added anything more than 1/4 of the syrup or Fernet. This is a difficult one to balance, so make sure you stir for a long time and taste until you find the right amount of dilution. Don't overdo the Fernet or you'll ruin the drink. 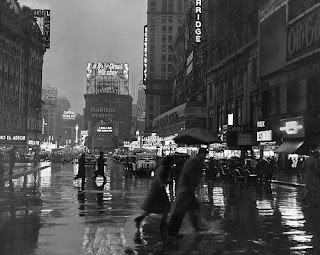 The Toronto is yet another variation on a classic - The Manhattan - in which the sweetening agent, vermouth, is replaced with a touch of simple syrup and a touch of the amaro Fernet, which in turn acts as a bittering agent with the Angostura. It's a very densely flavoured drink, and works extremely well with American rye (I wouldn't suggest making it without American whiskey, Canadian is just too subdued to keep pace with the Fernet). Jamie Boudreau claims to have discovered this drink in recent times, and you can see it popping up at craft cocktail bars all over the place. Sadly, you never would have found the "Toronto" in Canada, and you still may be challenged to find a place that makes it properly with real rye. Nonetheless, without a specific history, late 1940's New York is definitely an exciting time. 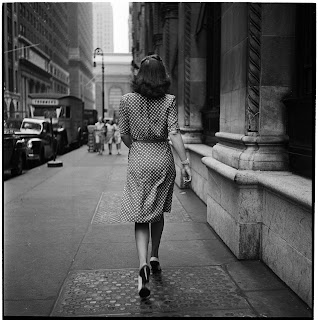 The 40's were obviously shadowed by the events of WWII, and the United States saw a small exodus of European artists and intellectuals who fled to the new world. Wartime brought rationing, scrap drives for raw materials, and homeland internment camps for Japanese suspected of being loyal to their country. The war did have its positives economically, however, and afterwards the effects of the Great Depression lessened. The number of women in the workforce increased dramatically to replace the number of men who left to serve overseas, "African Americans" began to fight for proper status, eductation increased, and social paradigms began to shift.
Medicine, science, and politics all began to change for the better, as penicillin (the first antibiotic) was invented, "coloured" people were approved to vote by the Supreme Court, unemployment dropped from 25% in the 1930's to 6%, and life expectancy increased. To put this era in an interesting perspective for us in the modern age, though, the U.S. population hit 132 million, the average salary was $1300 per year, only 55% of homes had indoor plumbing, and the average life expectancy - while rising - was still in the 60's. Commercial television hit the public in 1947, and the first computers were developed.

I'm going to talk a little extra about music this time because it's a period with which I am particularly enamoured... 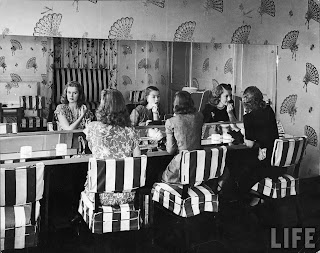 American music went through huge leaps in evolution in the first half of the 20th century, particularly in what is arguably its greatest export - jazz. We briefly visited Chicago in the 1920's and discussed Louis Armstrong's influence on popular music and jazz, and in the time since swing boomed in the 1930's and jazz became a musical mainstay on radio and in American homes. The late 1930's saw ridiculously talented and young musicians like Charlie Parker, Dizzy Golespie, and Thelonius Monk were pushing the boundaries of improvisation and creating bebop, which was a fast, furious, and highly improvisational form of jazz that, like early swing, shaped music to come. Once the U.S. became involved in WWII, the American Federation of Musicians had a strike against major recording companies for royalties, which was a big factor in not only the death of swing, but also jazz and bebop becoming a more underground and mysterious city movement. By the mid 40's, Miles Davis made his way to New York to play with Parker, but the latter's debilitating drug problems forced Miles to form his own band with Gerry Mulligan and Max Roach with Gil Evans in an advisory position, and started experimenting - as he always did - on the very outskirts of what was to come in music. Miles took all the elements from bebop jazz, which was by no means waning, and put his own spin on things by incorporating polyphony and even more free and loose improvisation that used more empty space and longer notes. The recordings from his nonet from 1948-1950 are considered the first and most influential of the subsequent period of jazz known as "cool." So far ahead of his time was Miles that these recordings weren't even fully released together until almost 10 years later, at which point cool jazz had become popular and made its way to the west coast with Gerry Mulligan and Chet Baker.
So, this piece is more complicated and not pop as have been all my previous musical accompaniments, but it just wouldn't seem right to post a cocktail from 1948 New York without tipping my hat to Miles.
(If you notice the "1957" in the title, just remember that's when "The Birth Of The Cool" was released, but it was recorded in 1949).

[[ Photography from the New York Times (street), Life Magazine (women), Jamie Boudreau (cocktail) and - no joke - Stanley Kubrick (single woman) from his early days as a photographer ]]
Posted by Rhett at 16:03