A Beginner's Guide to Gin

Gin is definitely THE cocktail spirit. It mixes so well with so many ingredients - it's light and summery with fruit, but it's also herbal and heavy when mixed with bitters or amari or vermouths. It has a long history, it's diverse in flavour profile, and it's an integral part of many classic and iconic cocktails, such as the Martini.

I've met people who say gin is awful, harsh, flavourless, and other manners of sad and untrue things. Anyone familiar at all with spirits or cocktails will completely disagree, but part of the process of enjoying these things is developing your palate. An important part of this as well is drinking quality products and quality cocktails. This comes down to what you buy, what bar you go to, what cocktail you're having, and of course, who your bartender is.

Cheap gins, like any other cheap product, can be harsh and will give you nasty hangovers. Even the worst gins, though, are endlessly easier to withstand and mix than the worst whiskeys.

So here is a little info for the beginner on gin itself, then a few suggestions on what to pick up at the liquor store, and a couple simple cocktails to try at home if you feel like opening the door to the most versatile of spirits.

Gin is a spirit, meaning that it's been distilled, for example from grain or fruit (usually wheat). Distillation is a process of boiling a liquid at a lower temperature than the boiling point of water, and capturing the vapours, which will be alcohol and other flavourful elements. The vapour is "infused" with botanicals, usually by vapourizing the alcohol through a chamber containing herbs, fruits, and spices. Gin can not contain sugar or colorants - in fact, the only thing that can be added to the distillate is water, which is used to dilute the alcohol to 40%, the typical percentage for a spirit. 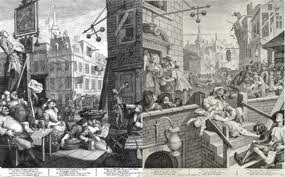 Gin essentially came from juniper berries, which throughout history have been regarded as medicinal. By the 11th century people were distilling the berries and using it as a medical remedy for disease. By the 17th century, the Dutch had started redistilling malt or wine with juniper and herbs, which was again sold as a medicine called genever. It made its way over to England, where low quality grain that couldn't be used for beer or ale was distilled and used to make a simpler form of genever, shortened to simply "gin." Because of how easy it was to make, and how drunk people got from it, it became wildly popular, taking over about half of all alcohol shops in London.

It followed British sailors to the tropics and was used to mask the terribly bitter flavour of quinine (a medicine used to battle malaria), which at the time was dissolved in carbonated water (then and now known as "tonic water"). This was the birth of the Gin and Tonic, still enjoyed today though much more palatable.

Gin was also often mixed with citrus fruit for sailors to avoid scurvey, and this was integral to the creation of many modern cocktails.

Nowadays, you will basically only see London Dry Gins or Distilled Gins.

First of all, here are some easy to find, cheaper gins that you can pick up in the B.C. liquor store, and some general thoughts.

Gordon's Dry - probably the worst gin you will find in a B.C. store, but it's still overall not that bad. This is the beauty of gin, even the worst isn't horrible, opposed to whiskey (and we have some of the worst tasting whiskey here in Canada). 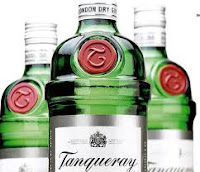 Tanqueray - definitely a go-to gin for just about anything. Its flavour is a little complex, with a lot of juniper, but also other herbs and spice (like coriander and angelica), and a little citrus. Mixes well with everything, but is also interesting enough to even drink old-fashioned. Drinking this guy will make you feel like you're walking through a garden or a forest. It has won gold and silver awards over the last decade, which is a good sign.


Bombay Sapphire - this gin is produced by Bacardi and has only been around since 1987, which makes it less interesting. I find it a little too perfumey, but it's very light and fairly easy to drink.
It is flavoured with almond, lemon, liquorice, juniper, orris root, angelica, coriander, cassia, cubeb, and grains of paradise. I don't know what some of those are either ;)

You definitely get the citrus from it easily, and it's much less herbal and much more floral than Tanqueray. Bombay has had very mixed reviews at spirit competitions, which is not a great sign.
$28 for a 750mL bottle, and definitely not worth the extra $1 than Tanqueray.

Beefeater - for a cheap gin, you can't really fault this one. It's not as interesting or complex as Tanqueray, but it's definitely smoother than Gordon's and not overly floral like Bombay. It contains juniper, angelica, coriander, liquorice, almonds, orris, oranges, and lemon. There are a lot of citrus notes, so it lends itself very well to cocktails with fruit.

$24 for a 750mL bottle, and an excellent starting point for someone interested in gin.

So, if you're just trying to get into gin, I suggest Beefeater. It's cheap, easy to drink, and mixes very well. If you're already familiar with gin and want to experience more interesting flavours and cocktails, Tanqueray is the cheap way to go.

Here are some more expensive brands that are very good and absolutely worth a try if you haven't:

Beefeater 24 - this isn't actually that expensive. I use this one quite often for mixing drinks. It's very smooth, and has a lot of subtle flavours that can be brought out in cocktails. It's quite light and not the most interesting compared to something wonderful like Hendrick's, but definitely worth the extra few dollars.

It's named 24 because it is infused with botanicals for 24 hours, the same as Beefeater London Dry, except that this time they've added Chinese green tea, Japanese Sencha tea, and grapefruit rind. 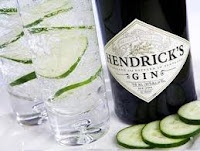 Hendrick's - this gin is basically it's own style. It tastes very different than most other gins, and has a lot of vegetable character to it. It's very smooth and aromatic and delicious, and makes a fantastic martini or any cocktail containing fruit or vegetable juice. It has a different distillation process using a different still than other gins, and is infused with juniper, but also with Bulgarian rose petals and cucumber. It has been named the "Best Gin in the World," and won numerous awards. If you have the money to spend and want to treat yourself, this is the one to go for. It's easy to find in B.C. liquor stores.

Victoria Gin - this is my lady's favourite brand. It's incredibly smooth, almost buttery. The botanical flavours are quite light, but still present, and the juniper isn't overpowering. Perfect for very light and fancy cocktails, and probably wasted on tonic and fruit. It's made right here in B.C. on Vancouver Island, and has won awards worldwide. Unfortunately, the sad state of alcoholic affairs in Canada is such that Victoria Gin is cheaper to buy imported in the United States than it is to buy right here where it's made. Seriously. You pay less in California than in Victoria. They also have an Oaken Gin that is aged in barrels and has a delicious, dark, vanilla, and caramel flavour.

Martin Miller Gin - this is probably my favourite, or at least tied with Hendrick's. It's distilled in the most traditional of ways in England, infused with juniper, orange and lemon peel, coriander, liquorice, cinnamon, cassia, orris, angelica, and nutmeg, and finally diluted with glacier water from Iceland (seriously). The taste is incredibly smooth and subtlely complex, and really changes the taste of cocktails you're used to. You can only find this one in an independent store, like on Main Street or at Legacy, or in the U.S. (where it's almost $30 cheaper).


There are others you can find in the store, but this a very good starting point. Nowadays there are some great gins being made using neutral grape spirits, rather than grain, and have a very different flavour. G'Vine from France is one I tried that completely changed the complexion of the cocktails I was trying, and is smooth straight, and very different than dry gins, with very little juniper character and a very light and sweet taste. I have only found it at Legacy for $90, but as spirits and cocktails get more popular, things will get better. We have to believe.

So finally, here are a couple classic gin cocktails to test out with your new bottle. If you get a decent spirit, and follow the recipe as best you can, and use fresh fruit juice and vermouth that isn't stale, you will make good, basic drinks. It's that easy.

This is the ONLY drink I feel you should shake that does not contain egg, juice, or cream. You can still stir it in a container filled with ice if you prefer, which won't get it as cold (and therefore it won't taste quite as good), but if you're just getting into cocktails you probably won't notice the difference.
Shake until your hands hurt (usually about 20 seconds), or stir for 30-60 seconds.

Strain into a cocktail glass and garnish with an olive to be traditional, or a lemon twist for something different, or a piece of cucumber if you're using Hendrick's, or anything you feel will match the flavours in the gin you're using.

The Gimlet
2oz gin
1/2 oz lime juice
1/4 oz simple syrup
Shake with ice in a cocktail shaker and strain into a cocktail glass. Garnish with lime zest or slice.

Be sure to enjoy it the VERY old fashioned way as well, with tonic water (adjust your measurements to your taste buds). The possibilities are endless and endlessly fun with gin, and I hope if you had a bad experience with gin at any point, you keep your mind open to giving it another go, because you're missing out!

Please continue on to read my much later post about buying gin in B.C., which has more specifics on certain brands, prices, and buying locations.
Posted by Rhett at 00:35