Don't Mind If I Do

Sticking with a theme here, this is another modern cocktail using egg white. It also uses one of my absolute favourite gins - Hendrick's - and possibly the most delicious thing you will ever put in your mouth - St. Germain liqueur. As well, we will be using a kind of bitters that was at one time popular then disappeared for ages before the saints at Bitter Truth made a new recipe (which has resulted in a lot of mixologists bringing back some forgotten cocktails and trying some new and fantastic ones) - celery bitters. It may sound strange to some of you, but it's really delicious and pairs extremely well with gin, particularly very herbal, floral, and vegetal ones like Hendrick's or Martin Miller's.
This drink was created by Christopher Flett at Pourhouse in Vancouver, which has some of the best bartenders I've met, including from my travels to San Francisco, Seattle, and Las Vegas. Christopher mentioned that he modeled the cocktail after something shown to him by legend Murray Stenson, previously from Zig Zag in Seattle, who was seen as one of the best modern bartenders in North America (he is supposedly the one who rediscovered and popularized the Last Word cocktail).
If you find yourself at Pourhouse, I highly recommend you try this one out, and if you get your hands on some St. Germain and celery bitters, you simply must try it at home too. Here's the Don't Mind If I Do:

Shake all ingredients vigorously without ice first, then add ice and shake again. Strain into a chilled rocks glass. 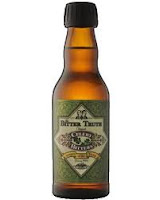 We discussed egg whites briefly last post with the Petruchio, and I will mention another very important thing here: add the egg white to your shaker FIRST. This way, if you accidentally get some yolk or egg shells into your mix, you don't have to discard some very expensive and tasty alcohol. A good tip in general is to add your ingredients from cheapest to most expensive, so if there are any screw ups early on, you're only wasting the cheapest stuff.
If you are still worried about having egg white (and you shouldn't be) this cocktail is still amazing without, but will balance differently and won't have the intended dessert-like consistency.

As for the ingredients, I am proud to announce that there IS actually a place in Vancouver to get bitters!! I only found it recently, had a mixology-gasm, sent some excited pictures to my like-minded brother, then promptly bought some new bottles. This magical place, which also has some great syrups, flavoured waters (like rose and orange), organic foods, and awesome cookware, is called Gourmet Warehouse and it's on Hastings Street right next to the Waldorf. Go there! You can get Fee's Brothers peach bitters, for example, for $8. Bitters other than Angostura are also available at Legacy Liquor Store, and The Bitter Truth can also be found at some Whole Foods locations. Theirs is the best of the celery bitters in my opinion, but other brands such as Fee's offer one as well.
St. Germain is $55 at the B.C. liquor store and I can plainly say mine is worth every penny. I've gone through half a bottle in almost half a year, so it will last you (though I speculate that I use it less than I'd like to because I spent so much on it), and I'm not exaggerating how delicious it is. Sometimes I open the bottle so my lady and I can just smell it. She often says that she would "drink dish detergent if it was mixed with St. Germain." If you get to the States, I saw it around for $28-40 (and you Alberta folks can pick it up for about $45).

As for the gin, you can check out my blog on buying gin here, but I will make a couple notes: Hendrick's is $45 in B.C. so is a real treat, and my other suggestion of Martin Miller's runs $50 or so. If you're not ready to make that kind of commitment, I suggest going with Tanqueray. The cocktail really tastes like a delicious garden, so you want to use a gin that has a lot of vegetable and herb notes like Tanqueray, whereas Beefeater would be too light and citrusy, one like Bombay is much too perfumey, and Gordon's is too boring. Tanqueray really is the gin that most of the time will step in when you can't get the special, expensive ones (and this is a compliment, not a slight to Tanqueray).