The Last Word is an older cocktail than people realize - if they’ve heard of it at all. It disappeared for probably 40 years until one of the great modern American bartenders, Murray Stenson, brought it to cult status in the mid 2000’s at the Zig Zag Café in Seattle. According to “Bottom’s Up!” by Ted Saucier, published in 1951, The Last Word was created in the 1920’s at the Detroit Athletic Club, making it a Prohibition-era cocktail.
It is one of the drinks that got me really interested in cocktails, and one of my favourites overall. 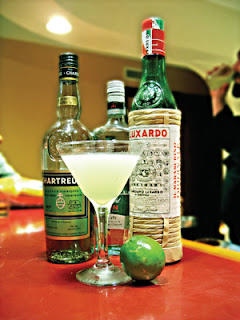 The Ingredients
On paper, it can seem daunting if you know the flavours of Green Chartreuse and Maraschino liqueur - or confusing if you don’t. Green Chartreuse (which hails from 1700's France, is naturally green, and is made from 130 different herbs) is a very potent herbal liqueur with an extremely interesting and deep flavour, and can overpower cocktails if not used properly and probably scare off the uninitiated if tasted straight. Maraschino liqueur is also a very interesting and potent flavour that can even more easily overpower a drink if not used properly, and is even more likely to scare newcomers away. It’s not red or overly sweet or fake or related to those fake and gross maraschino cocktail cherries (often not even made from real cherries). It’s a Croatian liqueur made from Marasca cherries and their pits, and tastes a little like fruit, nuts, herbs, and, well… Maraschino liqueur. (Also, it’s pronounced ma-ra-SKEE-no).
They’re both used in some fantastic drinks – particularly Maraschino, which is a must for your bar if you’re interested in classic cocktails. The two of them together in one drink balanced by citrus works in perfect harmony. The sweetness of the Maraschino and Chartreuse balance the sour lime, the herbal Chartreuse brings out the herbal character of the gin, the Maraschino has a subtle fruit profile that fits nicely with any juice, and both the sweet liqueurs seem to calm each other down. You can really taste the character of both yet feel like you're having something new.  I think it's fair to say that The Last Word is one of the most perfectly balanced drinks there is.
Maraschino is a must for your bar, and I recommend getting Chartreuse for fun as well, if only to make this particular cocktail.

The Recipe
Combine equal parts of:
Gin
Maraschino Liqueur
Green Chartreuse
Lime juice (fresh)
In a cocktail shaker, add ice and shake, strain into a cocktail glass
3/4oz of each ingredient makes for a good sized drink, I wouldn't go for more unless you have big glasses.
For the gin, I suggest something herbal to complement the Chartreuse, like my rock, Tanqueray (he's always got my back), or my special, fancy friends - Hendrick's or Martin Miller. 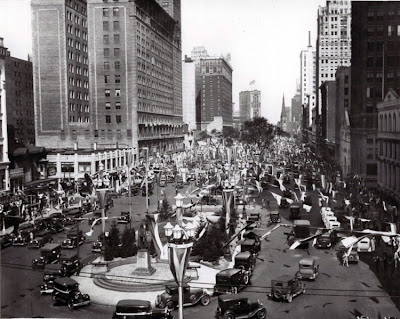 The History
In the early 20th century, Detroit was named the “Paris of the West” because of its beautiful architecture, and its Washington Boulevard, which was "lit up" by Thomas Edison. Construction was a huge industry here at the time, as were automobiles, and Americans were flooding in from the south and immigrants from Europe to get a piece of the job market and the bourgeoning businesses. (As an aside, having so many Europeans coming to Detroit probably brought an influx of European spirits and liqueurs, like say perhaps Chartreuse and Maraschino…) Because of this, population actually increased 6-fold from 1900 to 1930. Unions were being formed to protect workers, but of course the Great Depression had a huge impact on such a big city with so many jobs.
Due to the population booms, Detroit became a big jazz city like New Orleans, Chicago, and New York. One of Detroit’s biggest jazz names at the time was William McKinney and McKinney’s Cotton Pickers, and soon Don Redman (from Fletcher Henderson’s band) joined up and the orchestra became as impressive and influential as even Duke Ellington’s. Redman was integral to the development of big band swing and jazz arrangement.
So let’s celebrate The Last Word with some Detroit jazz, courtesy of Don Redman with McKinney’s Cotton Pickers, and tip our hats to both Ted Saucier and Murray Stenson for keeping this fantastic cocktail alive.