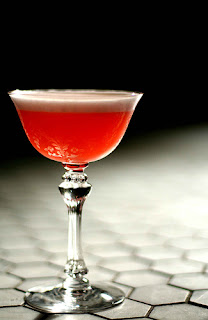 So here's a great modern cocktail utilizing two interesting ingredients that maybe you haven't tried yet - egg white and Aperol. This is courtesy of Jamie Boudreau, one of the great modern mixologists - or as he puts it, molecular mixologists. He is an award-winning bartender with his own line of bitters, a great blog here, an ambassador of the most delicious liqueur known to man - St. Germain - here, and has an inspiring and very informative show on the Small Screen Network called Raising the Bar. He currently runs the bar at Canon in Seattle, and has definitely come up with some of the more interesting new cocktails I've ever tasted.
(Let it also be noted that I am pasting his photography of his own cocktail here because it's better than any shot I could take).

Egg white is a very old and classic cocktail ingredient, and one that sadly became forgotten or shunned by both bartenders and drinkers over the years. There are some very tasty and old cocktails, such as the Clover Club, that call for it, and even some very well-known ones such as the Whiskey Sour, which in modern times has left the ingredient out. The use of eggs in general actually predates the cocktail age in some cases, and were used for texture. Fizzes, sours, nogs, and flips are just a few examples of the diverse cocktail styles that use eggs.
No, you won't get sick from having an egg white in your cocktail. The chances nowadays of getting sick from a raw egg are about 1 in 10,000, and keep in mind you're mixing it with alcohol (which kills microorganisms) and in a lot of cases with citric acid (from lemon or lime juice). Be sure to get your eggs from good sources, which is something you should always be doing anyway.
If you're still feeling adverse to the idea, I can tell you plainly that you will be missing out on some fabulous drinks. Also, I bet you could be served some drinks that you will truly enjoy without even realizing they contain eggs at all. Just try it!

Aperol is an Italian amaro, or bitter liqueur, with a bright orange colour and mostly orange flavour, but also with rhubard, gentian, and cinchona notes as well. It was originally created in 1919, but didn't see much popularity until years later, and nowadays in a new age of mixology is seeing a real resurgence. Often nicknamed "Campari's younger brother," it has a similar taste and purpose, but is much sweeter and less bitter.

So, for the drink...
First of all, you can see Jamie make it himself on his show here. 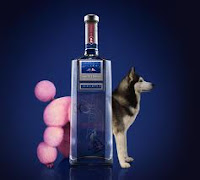 Secondly, I should mention that the type of gin will really change the flavour profile here. Making it with Beefeater 24 as Jamie intends (at least according to the Small Screen Network presentation, which could be sponsored by the product) really brings out the citrus, and makes a soft, smooth cocktail.
I had the lovely pleasure of making this with Martin Miller's gin last week with my own personal bottle I acquired for half the Canadian price in Seattle. It made a very different drink, with vegetal and herbal flavours coming to the fore and ultimately making what I feel is a much more interesting drink.

The Petruchio
(aptly named after a character in Taming of the Shrew, by the way, which is based in Padua - the birthplace of Aperol)
1 oz gin (Martin Miller's recommended)
1 oz Aperol
1/2 oz fresh lemon juice
1/4 oz rich simple syrup (2:1 sugar to water, or use 1/2 oz of 1:1 simple syrup)
1 dash orange bitters (Fee's preferred)
1 egg white

Shake all ingredients in a shaker withOUT ice first to emulsify the egg white, then add ice and shake all ingredients again. Strain into a cocktail glass.
Another way to emulsify the egg, courtesy of Jamie again, is to use a battery operated frappe device, like the ones you use to make a latte at home without a steamer. This is very modern, and I like sticking with the old-fashioned, classic ideas in general, so I prefer shaking.

A final note is about purchasing ingredients.
Aperol is available in the BC government liquor stores for $22 (I went through mine in about 6 months, so that's cheap), orange bitters can be picked up at the Gourmet Warehouse on Hastings St., and the only place I've seen Martin Miller's in Vancouver so far is at the Brewery Creek liquor store on Main St. It runs about $50, so is a real treat, but as I've mentioned in previous posts you can get it in Seattle for $28, or maybe even in the duty free shop.