A Begginer's Guide To Whisky/Whiskey Part 1: What Is Whiskey?

So I suppose it's about time I did a post on whiskey/whisky. I've thought about it a lot but consistently put it off because it's just such a huge topic to cover. American whiskey is my favourite spirit, though, so I feel I need to get into this at some point. Here's what we'll do... we'll go over a quick history of whiskey, some quick definitions (because there are A LOT of kinds), and then at a later point cover purchasing and specific brands by focusing on one type of whiskey.
I find it interesting to know where things came from because it helps me better understand and appreciate the thing itself. If you're not like me, skip this post and move onto the types of whiskey post.
Alright, let's do this.

The History of Whisky
So distillation seems to be a bit of a tricky topic. I've had trouble tracking down exactly who/where/what/how most of this happened, but here's the general idea of what I've found. It dates back thousands of years, but the clearest of first evidence of alcohol distillation comes from Italy in the 12th century. The next mentions of it appear in Ireland, then Scotland, where grapes were scarce, so malted barley and beers were used instead. The first written record of whisky is in 1405 Ireland, where it is referred to as "aqua vitae" (water of life). Scotland continued on with this tradition, and soon enough it became part of the culture, with even children imbibing it at a young age (and it was a much harsher, cruder version than we're used to). In Gaelic, aqua vitae is "uisge breatha," and in Irish "uisce beatha." Over time this was anglicised from "uisce" to "whisky."
In the 1700's, Scotland and England were united and the taxes on whisky were hiked up, forcing the production underground and increasing its value abroad dramatically. This also lead to other countries really started to distill their own whiskeys, in particular the U.S., where grains like corn and rye were common rather than barley. Whiskey production spread and better stills were invented and further down the road laws were created to distinguish the many different kinds of whiskey being created (ones that must still strictly be followed today).
[You've probably noticed at this point that I've switched from typing "whisky" to "whiskey." "Whiskey" refers to American ones, whereas "whisky" is used for everywhere else]

So there's the brief history lesson. 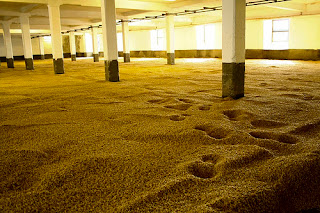 How is Whiskey Made?
Every whiskey is slightly different in how it's made, but the overall concept is the same for all spirits: distillation of a fermented liquid. Grains are harvested and allowed to germinate (then called "malt"), which releases natural enzyemes that convert starches to sugars. This malt is ground up, then put into tanks with hot water (now called a "mash"), sometimes with extra enzymes, and yeast is added. The yeast converts sugars to alcohols and carbon dioxide over a few days. This mixture is basically beer. For whiskeys, the carbon dioxide is allowed to escape, and for beer it's not, which is why beer is carbonated and whiskey is not.
The 'beer' is then distilled, allowing the alcohol to be collected and the byproducts to be removed, giving about an 80% alcohol "neutral grain spirit." Water is added to lower the alcohol levels, then the mixture is put into wood barrels to age, which softens the burn and adds flavours of its own. After aging, often more water is added to reach the desired proof, and then you've got your whiskey.
If you remove the aging process, this is essentially gin or vodka. If you use a grape spirit rather than a grain one, this is essentially brandy. Spirits are all basically made the same way, but subtle differences in production make big differences in flavour. Laws were put in place to really differentiate between the spirits and production guidelines are very strict and specific. 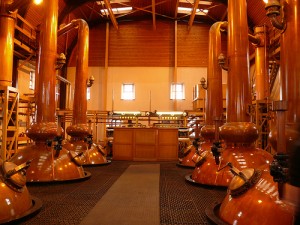 There's the dry information for anyone like me who wants to know it all. Next time I'm going to briefly go through each major whisky type and define them.