A Beginner's Guide To Whiskey/Whisky Part 2: Types Of Whiskey And Terminology

Now let's look at some whisky/whiskey definitions of the kinds you'll generally see around. The North American whiskies are defined by law only in North America (so someone in Japan could make a whisky out of rice and call it "bourbon" unfortunately), whereas the laws for Irish Whisky and Scotch are strict throughout most of the world. (Whiskies are made everywhere, including Australia and Japan, but I'm only going to look at the most popular and important ones. It should also be noted that I am in some cases paraphrasing the governing laws, and should you want more details please check out my ongoing guides on individual spirits). 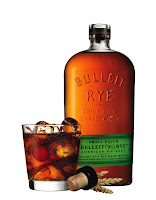 
Rye
- must contain at least 51% rye
- is distilled to no more than 80% alcohol
- agged in charred, new oak barrels at no more than 62.5% alcohol
- if aged for at least 2 years, it can be called "straight"
- has a spicier, drier taste than other whiskies
- must be bottled at no lower than 40% alcohol

- must be made in the US from at least 51% corn.
- aged in charred oak barrels
- distilled to no more than 80% alcohol
- put into the barrel at no more than 62.5% alcohol
- bottled at no lower than 40% alcohol
- if the above requirements are met and the bourbon is aged for at least 2 years and contains no additives, it can be called "straight"
- has a sweeter, smoother taste than other whiskies 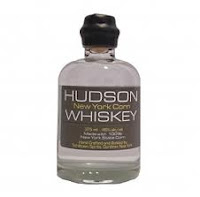 - follows all laws applying to Bourbon, but must be made in Tennessee (the makers insist it's a different kind of whiskey). These are often filtered through maple charcoal before being barrelled, which is one of the reasons some companies claim it's different than bourbon.

Corn
- must be made from at least 80% corn.
- must be bottled at no lower than 40% alcohol
- sometimes aged, sometimes not. This is the typical "moonshine" of old.
- a generally harsh tasting kind of whisky (because it's not usually aged), and quite literally has a "gym socks" character to it. That sounds terrible, but it's actually interesting.

This is the tricky (and stupid) one. Canadian whisky is almost always called "Canadian Rye Whisky" or just "rye." This is stupid because there are no laws dictating what is actually used to make the whisky, and most of the time Canadian whiskies contain no rye at all. Most of them are blended, made mostly from corn, have subtle and smooth (and usually boring) flavours. Brian Grant at Pourhouse described it perfect once by saying that a Canadian Whisky is like a Canadian, it's subdued, polite, quiet, and doesn't often make its presence known. That's fine for a person, but a waste of time for a spirit in my opinion. It should be noted that there are no laws involving mash or additives, so Canadian whisky can contain caramel colouring, flavourings, and any neutral spirits and not necessarily straight whiskies. Like tequila, buying cheap Canadian whisky is a bad idea for your taste buds and your hangover.
Of course, as with everything, there are a couple that are good (Alberta Springs 10 Year Old or Forty Creek are pretty good, and Alberta Premium is boring but not BAD).
Here are the only laws:
- must be made in Canada
- must be aged in new, charred oak barrels for at least 3 years
- must be bottled at no lower than 40% alcohol

Irish
- must be distilled and aged in Ireland
- distilled to no higher than 94.8% alcohol from a yeast-fermented mash of grains "in such a way that the distillate has an aroma and flavour derived from the materials used"
- must be aged for at least 3 years in wooden casks
- Irish whisky has a very malty flavour that tends to be much sweeter and lighter than most Scotch

Scotch
- must be produced at a distillery in Scotland from water and malted barley
- processed at that distillery into a mash, converted, fermented only with yeast
- distilled to no higher than 94.8% alcohol from a yeast-fermented mash of grains "in such a way that the distillate has an aroma and flavour derived from the materials used"
- aged in Scotland in oak casks for at least 3 years
- must be bottled at no lower than 40% alcohol
- must contain no additives other than water and caramel colouring 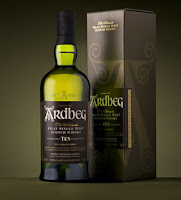 - Scotch has a huge range of flavours depending on where it's made. The malted barley is dried over a peat fire, and because of this most Scotches have a smokey character, some of them dramatically so. Some areas produce heavy, thick, leather, smoke, and tobacco flavours (like Ardbeg), whereas other regions produce softer, smoother Scotches with apple, pear, and soft malt flavours (like Glenfiddich).

Blended - if it's a blended malt, this means that it's a mixture of whiskies from several different distillleries but only contains one kind of grain. If it's just a blended whiskey, it means it's made from a mixture of grains and from a mixture of distilleries, and on top of that will often contain caramel, colours, and sometimes flavours. Unless stated otherwise, most whiskies are blends (which also means they're usually not very good). Most big name brands are blended, such as Canadian Club.
Single Malt - this means the whiskey is made at a single distillery from a mash that contains only one kind of malted grain. This usually only applies to Scotch and Irish whiskies.
Mash Bill - this is the name given to the mixture of grains that is fermenting. So a bourbon mash bill may contain 70% corn, 20% rye, and 10% barley.
Content - sometimes you'll hear someone say something like "Bulleit bourbon has a high rye content." This means that the mash bill, or mixture of fermenting grains, has a higher than usual amount of rye grain, which will have an effect on the flavour.

Next time I visit this series we'll look at some good, affordable brands to pick up for your home bar or fancy ones to try in your favourite bar on the town. This is a huge topic, obviously, so I'll be separating them by type of whiskey.

And click on "guides" on the right side of this page to see similar posts on everything from bourbon, gin, and tequila to vermouth and quinquinas.
Posted by Rhett at 12:14