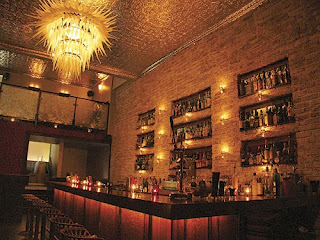 In the current growing and exciting boom of cocktail culture there are many bars trying to jump on the band wagon and not really taking the time to either find knowledgeable and skilled staff, or at least taking the time to learn and train to at least grasp the concept of classic bartending or modern mixology. Some try to appeal to cocktail aficionados and sports pubbers alike by covering the bar in TV's broadcasting sports highlights and orange-tanned servers in tiny dresses, yet cover the menu in classic and respectable cocktails like the Vieux Carre, Last Word, Aviation, the rare Old Pal, and even some more current concoctions from big names like Pegu Club and Death & Co. The problem with bars such as these is the drinks are often dummed down to appeal to the typical audience (I have particular places in mind); eg. drop the Maraschino to 1/4oz instead of a 1/2 because not everyone likes the taste, add soda to The Last Word to blunt the flavours, shake the Manhattan's because you don't know what you're doing, etc.
Some establishments use a more modern mindset to creating a cocktail, using carbonation, creative infusions, self-made bitters and vermouths, all manners of fire, and even barrel-aging mixtures to come up with new and exciting ways to push "mixology."
Amidst everything that's happening now, and as more and more cities are building up their cocktail-destination repetoirs, there are still names that come up again and again as inspirations, trend-setters, the meccas of mixology, and the ultimate hangouts for connoisseurs of cocktaildom. There are two major cities in the history of the American cocktail: New York, with its PDT, Pegu Club, Death & Co., Milk & Honey (and the list goes on), and San Francisco with its Rickhouse and Bourbon & Branch (this list goes on as well). I am honoured to have Jayson Wilde, the general manager of Bourbon & Branch, contribute a Maraschino cocktail this month (and he will be returning next month with an Averna cocktail as well).

B&B is a cocktail destination (they actually don't serve food) with a focus on Prohibition and the speakeasy culture. The location was a bar since 1867 and an actual speakeasy from 1921 to 1933, and was operated for a time as "JJ Russell's Cigar Shop," during which time John J. Russell the owner brought in booze from none other than Vancouver. The current incarnation of the bar takes its name from the term "branch water," used in the 1800s for pure, clean water (called a "branch"), and of course its brother-in-drink-arms at the time, bourbon (bourbon and water being a typical drink). B&B, like several bars in New York and Tavern Law in Seattle, attempts to retain its speakeasy atmosphere by using passwords to gain entry, and by having a second, secret bar called Wilson & Wilson (Private Detective Agency), where you need a further password to enter, and when you do you taste flights of three cocktails that change every night. B&B also has "house rules" that state, amongst some expected requests (such as that to "please speak-easy"), "no standing at the bar," "please exit quietly," and "don't even think of asking for a 'Cosmo.'" Pretentious? Definitely, but tons of fun, and something I'm sure that the true cocktail-hunters out there will appreciate now that more and more crappy bars are catching on and trying to fake it, or that we'll appreciate just to weed out the appreciative bunch out of the typical Saturday night crowds.
The crew here is skilled, and the cocktail list has had some seriously interesting stuff, like the "Autoroute Alpine," with a Dolin Blanc Vermouth base, Campari, lemon, honey, pepper, basil, and soda, or the "Winny De Puh," with reposado Tequila, lemon, honey, Mezcal, peach bitters, and cardamom, which you can enjoy while sitting in their very classic, warm, and red "library room," or in their maintained/recreated "Russell's Cigar Shop." This skilled crew will even teach you some of their craft in their "Beverage Academy." All in all, B&B is a must for any cocktail aficionado or anyone who cares about the craft. 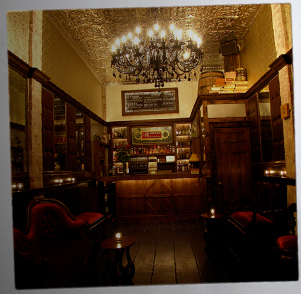 On to the recipe...
Jayson is combining Maraschino with Tequila, as we have seen a couple times in this series, but aside from the very special pepper and blood orange touches, he's also doing something kind of crazy - infusing the Maraschino with Meyer lemons. If you've gotten into the cocktail world, you've probably seen a lot of infusions, particularly those of gin and maybe bourbon (there are a lot of infused vodkas too, but those are really just tinctures since vodka is flavourless), and maybe you've seen an infused Cointreau or something of that sort, but I for one have never seen an infused Maraschino. The Meyer lemon is a really interesting idea, as they're a little more sweet and soft than regular lemons.
As for the choice of Tequila, Jayson had this to say:
"I chose the Espolon Reposado for a couple of reasons. One is that I wanted something with a little bit of oak flavor to compliment the Cinnamon and Black Pepper. Also, I wanted to use something that wouldn't break the bank. I tried this recipe with a few other Reposado's (Siete Leguas, Partida, etc) and the Espolon actually worked the best with the flavor combinations."
This is all in all a big collection of fruits and spices and just looks delicious. Thank you Jayson and B&B for the contribution!
Cheers!

Shake ingredients and strain into a large cocktail glass. Grate cinnamon over top to garnish.