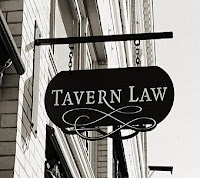 The next cocktail for our month of Maraschino hails from a widely respected bar from Seattle by the name of Tavern Law. It's a winner of many honours, including being named one of the Top 25 Bars In America from GQ Magazine, and is often mentioned, even in the New York Times, in the same sentence as such infamous names as Milk & Honey in New York and Bourbon & Branch in San Francisco. The chef pairing of Brian McCracken and Dana Tough are multiple award-winners as well, even being named in the Top 5 New Chefs by Gayot. Needless to say, it's a pretty amazing establishment.
Being somewhat easy to miss from the outside in Prohibition speakeasy fashion, but also having a secret second bar upstairs behind a black metal door called "Needle & Thread," really sets the perfect mood for imbibing, and the cocktail menu has a generally more traditional focus to match. To even get upstairs to the Needle, you need to call from the on-site telephone (similar to PDT in New York), and if one of the 25 seats are available, or more importantly, if you sound like you deserve a great drink, the bartender will buzz you up. There's no menu up there, so the incredibly skilled staff will create libations based on your mood and spirit preference.
I feel the mission statement on their website says more than I could about this place:
"In 1832 the Pioneer Inn and Tavern Law legalized drinking in public bars and saloons. The Golden Age of cocktails thrived for nearly a century until the 1919 Volstead Act almost destroyed the craft of the American bartender by outlawing the production and pleasure of alcoholic beverages. However, in hidden rooms and dark basements, thirsty patrons still sought spirits. And so the Speakeasy was born, booming until the repeal of Prohibition in 1933. Neatly another century after Prohibitions repeal, left with only the fond memories and old bar manuals, the art of mixing drinks is alive today thanks to the efforts of dedicated bartenders, historians and drinkers alike. It's because of their diligence and passion that the pleasures of artfully crafted cocktails, fine wine, and masterfully prepared food has kept the spirits of the night dancing on our tongues and in our hearts. Welcome to the celebration of our history."
Sounds like the kind of place I'd want to get a drink. You? 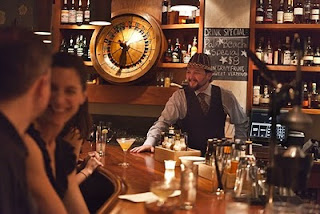 It's an honour to have a contribution this month from Tavern Law, courtesy of event coordinator / bartender, Monica Buntha. To continue a sub-theme here, she uses Aquavit (like "The Hemingway Solution" from Vessel), but this time going for a stirred drink, using the fantastic (and impossible to get in Canada) Dolin dry vermouth, along with Cynar amaro and Fee Brother's Whiskey Barrel-Aged Bitters. Cynar is an amaro (Italian bitter liqueur) made with artichokes, and is one of the more bitter of its ilk, opposed to Averna or Ramazzotti. You can very rarely find it in the government liquor stores, but Legacy will have it for just under $40. The bitters are the Fee Brothers Old-Fashioned Bitters (which have a heavy cinnamon flavour) that have literally been aged in whiskey barrels for a period of time to add a subtle layer of complexity, and to smooth the flavours out. These you can pick up at Gourmet Warehouse, but not all the time, as they're aged and therefore supply is somewhat limited.
Thank you so much to Monica and Tavern Law for contributing, and I implore all of you to head there for a drink if you're in Seattle, and hope that you're lucky enough to make it up to Needle & Thread as well.
Cheers!
Oden's Muse

Combine all ingredients in a mixing glass, add ice and stir, strain into a coupe.