The response from Fernet February was awesome, and I've had multiple requests for Maraschino March, so I decided to make it happen. I was going to wait until April (I was thinking Averna) to do another series, but come on - it's Maraschino.

First let's briefly look at what maraschino is. I'm going to plagiarize myself a bit here, borrowing from two previous posts - The Red Hook and The Last Word. Interestingly, those are two of my favourite cocktails... 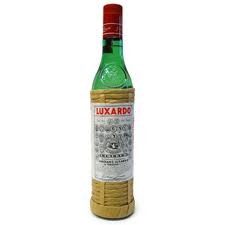 Maraschino liqueur dates back to the 16th century in Zadar, Croatia, where apothecaries at a Dominican monastery fermented Marasca cherries with the pits and sprigs, then distilled the mixture, basically making a cherry brandy. This "brandy" was then aged for at least two years in ashwood, which does not impart a colour, then diluted and mixed with a sugar cane syrup (some accounts say honey). Originally the liqueur was called "Rosolj," or "Rosoli," from "ros solis," meaning "sun dew." A couple hundred years later it was aptly renamed Maraschino.
As usual, the liqueur touted medicinal uses, which were of course later disproven, and was rare and prized. By the 17th century, larger distilleries in Zara started manufacturing it, and by the 18th century serious, industrial production began, and the liqueur quickly spread across Europe, and soon enough the rest of the world. It was a particularly popular liqueur among European royalty and high society, being a favourite of Kings Louis XVIII and Charles X of France, Czar Nicholas I of Russia, King George IV of England, Queen Victoria, and Napoleon Bonaparte.
Sadly, during WWII, Zadar was bombed 52 times, and all of the distilleries were destroyed. The Luxardo family (one of the owners of the distilleries and original recipe) were forced to flee to northern Italy where a new, smaller factory was built. The Luxardo distillery was eventually rebuilt in Zadar, and along with others in the surrounding area, are responsible for producing this wonderful liqueur, which is becoming more widely available now that cocktail culture is booming.

Maraschino liqueur is integral to a lot of classic cocktails, and you need to get yourself a bottle if you really want to get into making drinks. Unfortunately, once again, you can't get it at a government liquor store, but I see it often in independent stores, such as Brewery Creek on Main Street, or Park Royal Village, or Legacy. It's also about $30, but will last you a long time because it's so potent that you'll only be using small amounts. It's likely to scare a lot of newcomers away, but keep an open mind and an open palate and ensure that you're putting your taste buds in the hands of a skilled professional. It can easily overpower a drink, and I wouldn't suggest having someone you don't know or trust using it for you.


Please note:
Maraschino is NOT a cherry-flavoured sugar syrup, it's not red, nor does it even taste a lot like cherries at all. It is NOT related to those fake and gross maraschino cocktail cherries (often not even made from real cherries but rather from edible kinds of plastic and gum). There is definitely a fruit flavour there, but there are also herb and nut flavours too. The pits from the cherries impart a bit of an almond taste, similar to Amaretto (which is not made from almonds, but does taste like it because of the apricot pits used).
Also, it’s pronounced ma-ra-SKEE-no, not ma-ra-SHEE-no.

As mentioned, it's a very important ingredient in a lot of really old cocktails, such as the Martinez, pre-Prohibition cocktails such as the Aviation, Prohibition cocktails such as The Last Word, and lots of well-crafted modern cocktails, such as The Red Hook. It is a bit of an acquired taste - but what isn't? You'll be surprised how quickly you'll love it and get angry when your favourite Maraschino cocktail is made without the ingredient or not enough. It happens a lot, actually (like when the Granville Room made a Last Word with half the required amount, and an Aviation with so little I couldn't even taste it - shame!).

So this month is impromptu, yes, but it's going to be really fun. There are some new bars contributing, and I've expanded my Pacific Northwest region from Fernet February to now include San Francisco. We'll be seeing some friends returning, but also have the pleasure of getting a recipe from amazing establishments like Tavern Law and Vessel in Seattle, and Bourbon and Branch in San Fransisco.
As always, I encourage you to comment below each post, share your favourites, thoughts, and make any requests!
See you soon!

Email ThisBlogThis!Share to TwitterShare to FacebookShare to Pinterest
Labels: maraschino