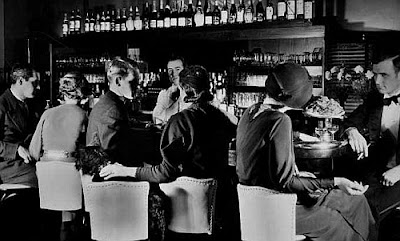 Today takes us to an entirely brand new destination for this blog - Toronto! While the city doesn't have the reputation or the scene for cocktails and mixology that New York, San Francisco, Seattle, or Vancouver has, it is not without a couple great bars and bartenders, and Robin Kaufman from the speakeasy-style Toronto Temperance Society has donated a brand new amaro cocktail for us to enjoy during Amaro April. A good example of what they're about, which is quite similar in spirit (pun intended) to New York speakeasies or Needle & Thread in Seattle, check out their House Rules.
I didn't have the pleasure of visiting the place myself, so I will pass the torch to my partner-in-crime - the lovely and talented Leah - who recently made the trip to T dot and not only asked Robin for an original cocktail, but also passed along her review...


"It was a relatively bad week for good alcohol. I was staying in Barrie, rather than Toronto, and as such, my only other bar experiences up to that point involved:
- An Irish Pub/Sports Bar that specialized in greasy dudes with Manwich-stained Polo's drinking draught (wherein I ordered a thoroughly underwhelming dry gin martini that was wet with cheap vermouth and regret)
- A charming local music venue full of suburban hipsters where I ordered Jack Daniels with no ice because it was literally the best thing I could see behind the bar. It was served in a plastic cup, and took me back to my late teens, where alcohol came in plastic cups, Pabst Blue Ribbon was served on ice, and Lucky Beer was 2$ a can. Memories, both misty and water-coloured. So, you can imagine how Sidecar and the subsequent visit to the Toronto Temperance Society was a most welcome delight.

I arrived early, following a long day of museums and history-dork stuff, and sat at the bar. Sidecar has a respectable cocktail menu, though the walk from the ROM and heat made me somewhat undecided. The friendly bartender, whose name escapes me, recommended a Sailor Jerry Sour which I ended up ordering, it was nice enough for a hot day (and just after 5:00), if not too sweet and dessert-y for my tastes. (Not that he can be faulted; when you're female and blonde and wear frilly dresses bartenders are right to assume you're looking for something sweet and light - or so I find) We talked briefly about Toronto tourist attractions (he recommended axe-throwing, which wasn't in the free 'Discover Toronto' guide I picked up from the airport), and I asked, politely, whether a visitor would be allowed to visit the TTS, above Sidecar.
And so I did. Through a little door and up a narrow staircase is the wondrous Toronto Temperance Society. It's a beautiful space, all dark wood and pastoral wallpaper, playing 20s-30's pop music, and nearly empty (it was early and a holiday weekend). I tried to decide what I wanted from their top notch menu of classic cocktails (with handy variations under each listing). The bartender, Robin (a fellow Vancouverite, incidentally), introduced the menu, and wanted to discuss my drink order – after a week of plastic cups of JD and $8 bottles of wine, finally, a real bartender - the kind who cares about what you're drinking as much as you do.
First, a side-note. TTS has a terrific selection. As a victim of the BC Liquor Distribution Board, such a selection is overwhelming. 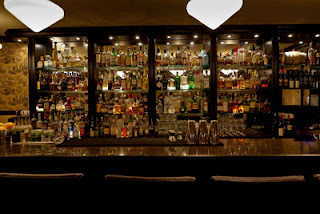 ...Aaand, back to the review. Robin made me an original of his – the "Fallow Grave," the recipe for which you will find below. I requested Bourbon, and the "Fallow Grave" happened to be exactly what I was in the mood for-- Buffalo Trace, Amaro Ninino (a first for me – like tasty cough medicine), Crème Yvette, Bittermen's Grapefruit Bitters and Regan's Orange Bitters. (As an aside, isn't Bittermen's Grapefruit Bitters lovely? It's like proper Grapefruit, rather than the more synthetic tasting Fee's-- synthetics have their place, of course, like Joan Rivers' immovable face or 70's fabric that lasts until the end of time, but there's something to be said for subtlety). The "Fallow Grave" is a kindler, gentler Bourbon cocktail with interesting depth from the Amaro and the coriander of the Regan's Orange. It's floral, but not without balls. Robin thought it may be a little too Crème Yvette heavy, and you could back it off just a hair if you plan to make it yourself (which I think you should), or embrace the Crème Yvette - I think it's quite nice for a spring evening.
My second drink was another lovely surprise. Tromba Tequila, Dolin Sweet Vermouth, and Boker's Bitters. Three all new ingredients - all delicious. Tromba Tequila was surprisingly smooth and versatile, a little floral – interesting enough to sip on its own and adaptable enough that it would probably be a nice addition to nearly any Tequila cocktail. Dolin Vermouth may be one of my new favorites. A future of being a shuffleboard-playing blue-hair who drinks straight Vermouth seems pretty great with either Dolin Sweet or Dry. (Sorry. I've known a lot of Grandmas who drink a lot of Vermouth) - and the inclusion of delicious Boker's Bitters makes this drink exciting. TTS is generous with tasters, and I finished the evening off with a barrel-aged Boubon concoction with my newfound favorites – Dolin vermouth, Boker's bitters, and a bit of Fee's Peach. (See? Small quantities. The 70s leisure-suit lives.)

And the TTS experience? Really, one of my favorites! The service is impeccable, the atmosphere is classic and the company is great. Don't be fooled by their membership-only policy – Robin, Oliver, and the other fellow who's name I didn't catch but who was kind enough of draw me a map are utterly without attitude or airs. The members-only policy, as I gather, is to maintain the unique atmosphere, and I would certainly say enjoying an amazing cocktail in civilized company without girls with orange tans and fake Coach bags all hopped up on flavored-vodka Flirtini's and their gold-chained man-friends ordering rounds of Hypnotiq for the table has a certain cache.
So, if you're visiting Toronto, put down that plastic cup of JD and take it from me – visit Sidecar, and maybe, if you ask nicely, you'll find yourself at the Temperance Society. Lucky you!
(In addition to drinking alcohol and writing, I make and enjoy movies. Follow me on my new Twitter: @traitorfilms)."

A note on ingredients: Creme Yvette is NOT the same as Creme de Violette. People often make this mistake. While they are somewhat similar, using violet flowers as flavour components, Yvette is much more complex, also using vanilla and other spices. The makers of St. Germain have created a new brand (after it being quite impossible to get anywhere since the late 1960's), but you'll be stuck with finding it in the states as far as I can tell. If anyone knows where to find it in Canada, please comment!
Amaro Nonino is available at Legacy, where it will run you $50.
Regan's Bitters are available at Legacy for $11, and Bittermen's as well for $27 (they're only $16 at Gourmet Warehouse, though).

Stir all ingredients over ice and strain into a cocktail coupe. Flame a grapefruit peel over top.

Thanks to Robin and TTS for the contribution!