A Beginner's Guide to Vermouth 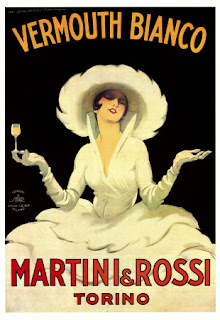 The practice of aromatizing wine dates back to at least 400 BC in Greece, the purpose of which was both to mask poor or spoiled wine and to serve as a medicinal tonic, just as most spirits and liqueurs originate. Once distillation became commonplace after the 12th century, wines began to be fortified as well as aromatized, most notably in 16th century Germany, with usually a brandy being used to fortify and wormwood for aromatizing. This herb was believed to cure stomach and intestinal disorders and parasites, and the drink began to include many other herbs and spices and became a cure-all, much like bitters. These "wormwood wines," or "wermut" in German, became popular in England over the next hundred years, and the name became anglicized to "vermouth."
By the 1786, the first Italian vermouth was invented by Antonio Benedetto Carpano, which was fuller-bodied, sweet, and dark in colour. It became popular in the Turin royal court, and Italian vermouth became a staple in the country's drinking. Likewise, in the early 1800's in France, the first French vermouth was created by Joseph Noilly, which was not sweetened nor coloured like its Italian counterpart.
By the late 1800's, vermouth was not the popular drink it once was, particularly in a medicinal sense (partially due to the common popularity of bitters), but at this time also found its way into early mixology via two of the most famous cocktails known to man, the Manhattan (and its original variations) and the Martini (ditto).

In recent times, the most typical grapes used for a vermouth wine base are Clairette blanche, Piquepoul, Catarratto, and Trebbiano. These are all white wine bases, and in sweet vermouth, sugar or caramel is added before the fortification with a spirit is performed, and sometimes the wines are even aged before aromatization. The spices used can include cloves, ginger, coriander, chamomile, juniper, hysspo, marjoram, cardamom, quinine, cinnamon, citrus peels, and small amounts of wormwood. Torino is still home to most Italian vermouths, including Martelletti, Carpano Antica, Punt e Mes, Martini & Rossi, ad Cinzano. France is home to most dry vermouths, including Dolin from Chambery, and Noilly Prat from Marseilles. Newer vermouths have been produced outside of these two countries, most notably the excellent Vya vermouths from California, and the more adventurous bars have even created their own vermouths by steeping wine in spices and herbs.

Now that an age has passed of anti-absinthe propaganda has passed and wormwood has become a slightly more accepted herb to use in vermouth, bitters, and mixology, it becomes slightly more clear what defines vermouth from other aromatized wines, but still there are numerous vermouths that use very little if any of the herb in maceration. So now, the only thing that really defines a difference between products is the history - Lillet and Dubonnet originally contained a noticeable amount of quinine (hence being labelled 'quinquina's'), vermouth contained noticeable amounts of wormwood, and so forth. So what we've ended up with is labeling certain products as "vermouth-style" products because there is no modern, definitive separation between so many fortified wines. Lillet, for example, essentially contains no quinine as of 1986, and is just a blend of Bordeaux wines fortified with citrus-peel macerated liqueuers, so is barely a quinquina as it is historically considered. It contains no wormwood, but most vermouths nowadays barely do either, and quinquinas can be used essentially as vermouths in cocktails now anyway, so what does it all matter? It seems we've reached a similar point with fortified/aromatized wines that you would with a rum or whiskey - they are the same family of beverage, but product to product act very differently within a cocktail. Using a straight rye in a cocktail will give you a noticeably different result than a straight bourbon, and using a heavily-aged Panama rum will give you a different result than a barely-aged Barbados rum, and so forth.

Keeping this in mind, I suppose we should focus less on how to define certain products and more on what we choose to use in our cocktail to make things balance the way we want. While Lillet is chosen specifically for a Corpse Reviver #2, dry vermouth is chosen specifically for a Martini or a Metropole. Dubonnet is chosen for an Opera, while sweet vermouth pairs individually by brand depending on the whiskey you choose for your Manhattan.

The synopsis here is that we've lost our definitions over time, and while anything not labelled "vermouth" isn't a vermouth by traditional standards, almost nothing is because very few products use any wormwood. The ultimate key is what you personally chose to use in mixing your own cocktails. Taste products, try them out, and choose wisely what you feel pairs best with your other ingredients. Punt e Mes is more bitter, so pairs better with sweeter whiskies in a Manhattan. Carpano Antica is full-bodied, but very sweet, so pairs excellently with another full-bodied and dry bourbon, such as Booker's. So on and so forth. Experiment and enjoy.

Check out the first post in the mini vermouth series on fortified wine classification.
and this post on quinquinas and americanos
Posted by Rhett at 18:26