Our next contribution comes from a first-timer on this site, Mr. Justin Taylor - lead bartender at Yew Restaurant and Bar in the Four Seasons in downtown Vancouver. Originally from Ontario, Justin brings over fifteen years of experience behind the bar and some award-winning efforts, including placing second in the Giffard Iron Bar competition last year and going on to represent Canada in the Giffard International Cocktail Challenge held in France. His approach to drink creation is bold and modern, using barrel-aging on both his cocktails and his spirits, making liqueurs in-house, and infusing with spice and even actual pieces of meat (buffalo in vodka - for real). A look over Yew's cocktail list shows a lot of classic inspiration, such as the "Golden Eye," a Vesper-variation using house barrel-aged genever, vodka, and Lillet, or the "Yew Gimlet," adding Aperol and house-made Velvet Falernum to the gin and lime mix. Continue on, though, and you'll find some pretty crazy combinations, like the "Crow's Foot" using single malt whisky, Lichi Li, melon, vanilla, cranberry and lemon, or "La Bonne Mere" with Fernet Branca, chocolate, strawberry, and sparkling wine (I know, right?). He even gets into shrub territory with his "Ebi Sunomono" mixture of gin, cucumber, yuzu, and rice wine vinegar.
His menu does have a selection of great classics too for the less adventurous, including the less-seen Lucien Gaudin and Twentieth Century.

First we start with his "Rosemary Collins," for which he infuses Bombay Sapphire Gin with rosemary. According to Justin, "the Bittered Sling Cranberry really adds a depth to this simple and refreshing cocktail." 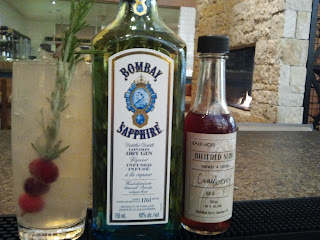 Combine ingredients, shake with ice, and pour over ice in a highball. Top with soda and garnish with rosemary and cranberries.

Next up is a twist on the New Amsterdam cocktail in which Justin uses Boomsma genever that he has aged in an American oak barrel with medium char for six weeks. Justin describes this one as "a slow-sipping cocktail with deep complex flavours from the Bittered Sling extract and the oak-aging." Presumably you could try this one with an oude genever, but we can't get any here in Canada, so this is an altogether fun and adventurous experiment! 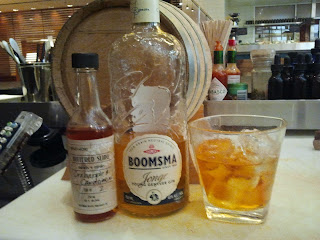 Combine all ingredients with ice and stir. Pour over ice in a rocks glass and garnish with a "generous spray" of orange oil.

Lastly, we have a cocktail that will be used for the second installment of the Yew Shake It competition (see below), Justin's "Unusual Margarita." Here he goes a step even further, aging a 4:1 mixture of Hornitos Tequila and St. Germain elderflower liqueur in a medium charred American oak barrel for four weeks. The Moondog bitters "bring spice to this cocktail and makes for the most unusual Margarita." 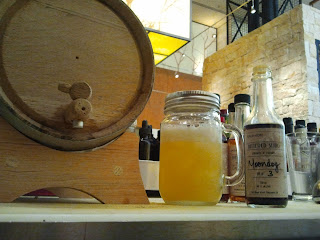 Combine all ingredients with ice in a mason jar and shake.


There are some fun programs happening at Yew as well, if you haven't made it down yet, such as the "We Make It "Yew" Shake It," where the bartenders combine your ingredients for you in a mason jar, and you shake it. Take your picture while you're shaking and post it to their (or Justin's) Facebook or Twitter pages, and he best (or worst?) picture will win you a gift certificate to Yew. They've also got Foxy Friday's happening each week - show up wearing some pink and you get a free appetizer and drink special. Altogether fun stuff.

Thanks to Justin and the Yew team for this contribution!