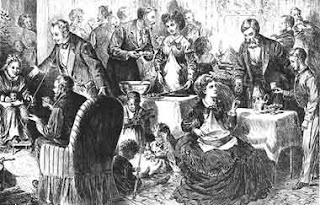 Eggnog, the most popular of seasonal drinks, has a clouded history likely due to its old age. It is believed to have derived from the English "posset," a mixture of hot milk curdled with wine or ale and usually spiced that dates back to the fourteenth century. It was prescribed as a cold remedy, and over time became more a drink of leisure, adding egg to the mix and often consumed for breakfast. Milk and eggs, however, were not always easy to come by, and the drink was eventually most popular amongst the higher class. When it was brought to the American colonies where most had their own chickens and cows the drink gained a new popularity. However, the sherry, Madeira wine, or brandy that were traditionally added were scarce or highly taxed, so naturally the Americans added rum instead, which was about as easy and cheap to find as water at the time.

The name "eggnog" has several possible origins, one being simply a simplification of "egg and grog," or "egg'n'grog." Grog was a watered-down rum consumed by sailors in the 17th century. The water taken on-board ships at the time spoiled over time in the sea-soaked barrels, and the rum rations (and earlier ale or wine) were used to mask the terrible taste and conversely to reduce the sailors' intoxication levels. Citrus juice was often added to the mix to combat scurvy. Adding egg to a rum and water mixture could be described as "egg and grog," leading eventually to the drink's modern name.

The suffix "nog," at one point also referred to a strong ale, which could have benefited from the addition of an egg at mealtime or wintertime, leading to "egg and nog."

The more accepted origin of the name is from the word "noggin," referring to a small wooden mug that was often used in taverns to serve drinks at tables (while drinks served near the fire used "tankards"). An egg drink served in a noggin could easily be compounded to "eggnog."

Regardless of the origins, eggnog as we know it today became a staple of American drinking culture, particularly in the colder months likely due to the drink's hearty nature. It was often consumed in a punch style, with copious amounts of sugar, cream, and booze, while being left out at room temperature for days. Making such a drink in warmer weather would have made for faster (or more unbearable) spoilage, which is likely another reason it became a winter drink. Everyone had a good recipe, including George Washington (a particularly boozy one), and by the mid 19th century when Jerry Thomas published his fundamental cocktail book, "How To Mix Drinks," eggnog had become optionally a single-glass drink. Below are two of the most classic of nog recipes, Thomas' single serving Egg Nogg, and his recipe for the drink he claims to have created (though it was later proved actually preceded his birth), Tom & Jerry. I have also included the recipe we use at Pourhouse, where we try to approximate as many drinks as possible to the style and mentality of the Golden Age (1850's-1920's). This recipe is essentially the same, but with less milk and slightly less liquor.

In the coming weeks I will be sharing some modern nog recipes as well, so stay tuned.

Fill the tumbler 1/4 full with shaved ice, shake the ingredients until they are thoroughly mixed together, and grate a little nutmeg on top. Every well ordered bar has a tin egg-nogg "shaker" which is a great aid in mixing this beverage.

Beat the whites of the eggs to a stiff froth, and the tolks until they are thin as water, then mix together and add the spice and rum; thicken with sugar until the mixture attains the consistence of a light batter. A tea-spoonful of cream of tartar, or about as much carbonate of soa as you can get on a dime, will prevent the sugar from settling to the bottom of the mixture.

To serve: Take a small bar-glass, and to one table-spoonful of the above mixture, add one wine-glass [2oz] of brandy, and fill the glass with boiling water; grate a little nutmeg on top.

In David Wondrich's "Imbibe," where he lists so many of these classic Jerry Thomas recipes, 2lbs of sugar is suggested instead of 5, because that's a "crazy amount of sugar." Also, he suggests substituting the hot water for hot milk, "as they often did at the turn of the century." My lady is lactose-intolerant, so I make a fair share of this just with water and enjoy it all the same. If you suffer a similar affliction, I also suggest using almond milk, which has a thicker consistency so will give you that nog texture you want. Also, Thomas himself suggests using a mixture of 1/2 brandy, 1/4 Jamaica rum, and 1/4 Santa Cruz rum instead of just straight brandy. I love making my egg nog with a mix of brandy and rum, anywhere from 3:1 to 1:1.
A final note is that this mixture is easily scaled down. I have made some for small parties of 4 by dividing by 6, for example. Experiment and taste as you go along.

Combine ingredients in a shaker with ice and shake hard to thoroughly mix. Strain into an old-fashioned glass and grate some fresh nutmeg over top.