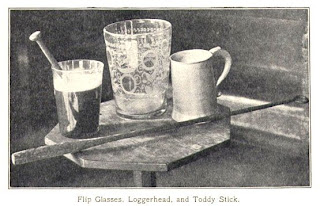 "The Flip" is one of the earliest recorded mixed drinks, dating back to at least the late 17th century in colonial American taverns. Sugar or molasses, spices, and rum were added to a large bowl of beer, a practice likely derived from masking or delaying spoilage similar to mulling wine. A red hot loggerhead, or fire poker, was inserted into the mixture, causing it to froth and the sugar to caramelize - a process called "flipping." As far as is known the recipe remained unchanged until the mid-19th century, listed in Jerry Thomas' seminal tome "How To Mix Drinks" (1862). Here warmed ale and a mixture of eggs, sugar, rum or brandy, and ground nutmeg, ginger, and lemon peel are tossed between pitchers until smooth (perhaps another origin of the name "flip"). Likely due to the streamlining of this time-intensive process, the Flip (like the Punch before it) evolved into a single-glass drink and the hot temperature became optional. In Thomas' 1887 revision of his book he included seven cold and six hot Flips, each listed simply as a liquor with egg, sugar, and water (hot or ice), topped with freshly ground nutmeg.

(A note here that while the modern [meaning 19th century] Flip seems similar to Egg Nog, they differ in one important aspect: milk. Nog contains milk or cream while the Flip does not. It  was often made in a punch bowl, but like the Flip it did have a by-the-glass recipe as well. More on Nog later this month.)

Flips have evolved into a whole range of uniquely satisfying drinks, and I will be sharing some modern ones soon. For now I'll share Jerry Thomas' 1887 recipes for both a Hot and Cold Flip, and then his Hot English Flip of old.

Dissolve the sugar in a little hot water, add the brandy and egg, shake up thoroughly. Pour into a
medium bar-glass and fill it one-half full of boiling water. Grate a little nutmeg on top, and serve.

Here, many liquors are possible. Thomas listed brandy, rum, Holland gin, and whiskey, but feel free to experiment. For the sugar, you can replace it with the same amount of 2:1 simple syrup, or twice the amount of 1:1.

Dissolve the sugar in the water, add the liquor, egg, and ice, shake up thoroughly. Strain into a small bar-glass. Grate a little nutmeg on top, serve.

Lastly, here is the original Flip using ale and rum.

Heat the ale in a saucepan ; beat up the eggs and sugar, add the nutmeg and rum, and put it all in a pitcher. When the ale is near to a boil, put it in another pitcher, pour it very gradually in the pitcher containing the eggs, etc, stirring all the while very briskly to prevent the eggs from curdling, then pour the contents of the two pitchers from one to the other until the mixture is as smooth as cream.

To make a "Hot English Ale Flip," simply omit the rum and two of the eggs.

[[Photograph from "Stagecoach and Tavern Days" by Alice Morse Earle, 1900]]