Winter is here! This is probably my favourite time of year. Decorations, lights, Christmas music and movies, warm fires, presents, and of course, winter drinks. In October we looked at both classic and contemporary seasonal drinks that were tasteful, and this month I'm going to be doing it all over again with a winter and Christmas theme. We'll start off by looking at the classics in their original incarnations. After that we'll be looking at some contemporary versions and new creations from a handful of great bars from all over the place, including a lot of newcomers to the site.

To begin it seems fitting to start with, well, the beginning. Foregoing a detailed history of mixed alcoholic drinks (for which you read David Wondrich's "Imbibe," if you haven't already), a simple description of the progression will suffice to bring us to out first winter drink, the Hot Toddy. The beginning of the mixed drink can essentially be be credited to punch, being a combination of wines and/or spirits with fruits and sugars that dates back to the 16th century. Throughout the next two hundred years the desire for a faster and therefore smaller version of these drinks came about, which brought us to the Collins, Daisy, Fizz, Cooler, and Cobbler. By the mid 18th century, further simplifications of these drinks came about, removing fruit from the equation, and likely due to this decision happening during the winter, hot water often replaced the cold. Now we simply have spirit, sugar, and water, with varying garnishes. These drinks were, like all mixed drinks at one time, considered medicinal - a cure for ailments of any kind, particularly those of the stomach. These drinks were named the Toddy, Sling, Julep, Smash, Sangaree, and Skin.

Now this collection of drinks were essentially all the same save their garnish and their temperature, which of course became confusing for patrons and bartenders alike. For example, a Toddy could be either hot or cold, and by the late 1800's was sometimes garnished with nutmeg, while the Sling could also be hot or cold and was always garnished with nutmeg. Both were simply spirit, sugar, and water. A cold Toddy with shaved ice garnished with orange slices and a little mint is a Smash, a cold Sling with shaved ice and mint instead of nutmeg was a Julep, and so on and so forth. Over the next hundred years or so these drinks all evolved into much more distinguishable but often terrible drinks, incorporating liqueurs and juices galore. 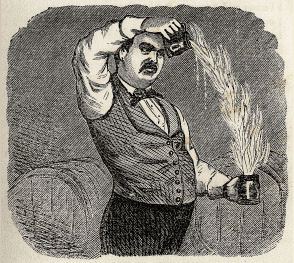 In the winter, a hot Sling or Toddy is a beautiful thing, and if you haven't tried a traditional one, today is the day. They're extremely simple to make and will warm you like you never thought possible. The recipe is from the 'grandfather of mixology' himself, Jerry Thomas in his 1862 tome, "How to Mix Drinks or the Bon Vivant's Companion" (essentially the first book on bartending). While future generations of Toddies suggest using honey instead of sugar and adding lemon juice, I suggest doing neither. The simplicity of the drink is wonderful. If you want to make the drink more modern I make one suggestion: add bitters (thereby making it a hot Cock-tail). Angostura is often best, but try pairing Peychaud's with brandy or Scotch, Bitter Truth's Jerry Thomas' Decanter Bitters with rum or brandy, or any kind of aromatic bitters that pleases you.

Stir with a spoon.

As for the choice of spirit, use what you like or try them all and find your favourite. As with any drink, but particularly simple ones, the better the quality of spirit the better your drink will be, so use a good product if you can. There's something wonderful about a Brandy Toddy, but a Scotch or Bourbon one is wonderful as well. As for rum, I might suggest going fancy and making a Hot Buttered Rum, which I will discuss very soon.

Adding a nice large piece of lemon peel and removing the sugar (the former is delicious and the latter I don't suggest) makes this a "Skin." If using whiskey, this becomes a "Whiskey Skin," for example. Adding full slices of citrus makes for quite a different drink that should not bear the name "Toddy." Stick with the peel or nothing.

Originally, the Toddy was distinguished from the Sling by its absence of nutmeg, but later versions of the drink often included it as a garnish. Use at your discretion. As always, the freshest ingredients are the best, so grate your nutmeg if you can instead of using pre-ground.

As for sugar, raw or Demorera sugar (and simple syrup) is always best in mixed drinks as it gives a richer flavour. I only suggest using white sugar if you are hellbent on maintaining a clear colour in you drinks, as the raw sugar is brown. If you don't have sugar handy for some reason, you can use the same amount of 2:1 simple syrup, or twice the amount of 1:1.