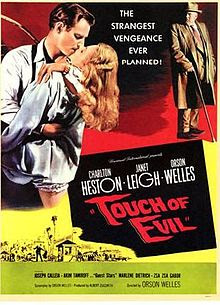 August is film noir month at the Pacific Cinematheque in downtown Vancouver. Lately for me every month has been film noir month as I've been renting droves of dark and depressing classics from the library. I've named several of my few original drinks after some of these films and will be sharing a couple recipes. I highly encourage you to make it to at least one of the films being shown at the Cinematheque as they have consistently great programming and operate almost entirely on the generosity of volunteers. Commemorate your visit with a classic cocktail, or perhaps even with one of mine.

First is a Martinez variation named after one of Orson Welle's most famous films, 1958's "Touch of Evil." This film follows a Mexican narcotics officer played by Charlton Heston who is caught up in a drug war involving both Mexican and American police and crime families. He finds corruption in the most dangerous of places, an American Police Captain played by a bloated and slimy Welles, and the more he uncovers the more he puts both himself and his new wife (Janet Leigh) in danger. This movie is dark and disturbing (including a surprisingly unsubtle gang-rape scene), visually ahead of its time, and has a last act that will have you on the edge of your seat.

Interestingly, at first Welles wanted nothing to do with the picture, and when he became involved the script underwent some major changes. Heston actually agreed to do the film under the impression that Welles was going to direct, but this was a misunderstanding and the studio had no such intention. Heston supposedly refused to do the film unless Welles did in fact direct, and the studio changed its mind. Unfortunately the studio essentially fired him after the shooting was finished and made major alterations to the editing of the film. Before his death, Welles left instructions on how he wanted the film recut, which were carried out and the film was re-released in 1998 to his specifications.

This cocktail smells and tastes of smoke and dark spices, reminding me of Welles in this film. It is still quite smooth, however, and the proportions and addition of Jerry Thomas bitters make it delightfully dry. On a further conceptual (and silly) note, the Martinez is an American drink with a Spanish name and I am using Mexican spirits rather than the usual English gin. In Touch of Evil, Heston - an American actor - plays a Mexican whom they call "Mike," a typical American name. All in all it's just a fun twist on a classic. Cheers!

Stir ingredients with ice and strain into a cocktail coupe. 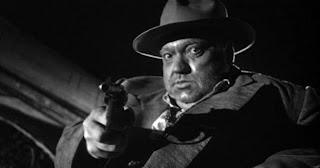