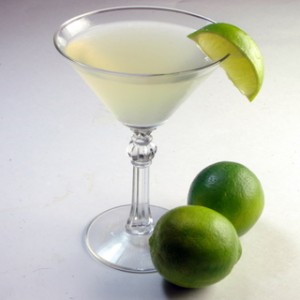 I feel compelled to write about this drink for a couple reasons. First of all, it's definitely in a family of cocktails that was butchered in the Depression-era of cocktails (Jamie Boudreau's term, not mine) - the 70's and 80's - and continues to be ruined today by many a bar and many a sour mix. The Daiquiri is a very old drink and a very simple and delicious one, yet most places you go will serve a blended (a no-no for anything that's not Tiki) mess of cheap rum and a ridiculous amount of sugar - usually in the form of some cheap, flavoured fruit-mix. Cocktails don't need to be overly sweet, and anytime they are it either comes from trying to mask cheap or bad-tasting ingredients, or trying to mask the flavour of the alcohol, which begs the question why you're having a drink in the first place. A well-made cocktail tastes delicious without heaps of sugar! If you don't agree, you haven't had a well-made cocktail. I digress...
Secondly, rum is a spirit I didn't know much about until more recently, so I started buying different kinds, trying new drinks, and looking more into its history and that of its cocktails.

The History
The origin of the Daiquiri is not confirmed. It's a very, very old drink using a very, very old spirit, and as such there are several origin stories. One story is that it was invented by an American engineer around 1900 in Santiago, Cuba, near an iron mine named Daiquiri. While entertaining other American guests, he ran out of gin, so tried a simple sour using rum, which was nearby and plentiful in the area. About 10 years later, US Navy officers tried the drink and brought it back to the Army and Navy Club in D.C. where it gained American popularity. Other stories include its invention for keeping the Daiquiri mine workers happy and complacent by feeding them rum, softening it with sugar and water, and getting them the vitamin C they need to avoid scurvy via lime juice.
However, the latter story is also essentially the same as the grog that British sailors drank aboard ship from the mid 18th century forward. This too included rum, lime or lemon juice for vitamin C, and sugar to make things more palatable. Like most early cocktails, its origins are rooted in health remedies and primitive medicine. The sailors travelled around the world, but particularly the Caribbean, and could have easily spread the drink into Cuba.
The Daiquiri has evolved into many variations, the most famous of which were known from the El Floridita bar in Havana. It was published by David Embury in 1948 in his very famous and influential book, "The Fine Art of Mixing Drinks," where he lists it as one of the 6 basic cocktails. His ratios stated a basic 8:2:1 of spirit:sour:sweetener, but over the years as people lost interest in cocktails and the culture changed, particularly in North America, the sweet portion has increased and increased until we were left with the sticky, gross, pink and blue messes that restaurants continue to serve and abuse the name of a classic drink. A Daquiri is simply a rum sour.

The Culture
One reason this drink definitely became more popular in the United States in the 1930's and onwards is because of the Good Neighbor policy put in place by Roosevelt in 1933. This policy stated that there would be no armed intervention with another country (namely a Latin American one), and that the US would "engage in reciprocal exchanges with Latin American countries." It was meant to create new economic opportunities, trade agreements, and of course, assert influence over Latin America. This policy stood until the Cold War "began" and US foreign policy in general took a dramatic turn.
During the 30's and 40's though, there was an influx of Latin culture, food, drink, and of course, music. This was reciprocated to places like Cuba, and the birth of Latin jazz was a big artistic evolution of the time. American jazz artists such as Dizzy Gillespie started incorporating Latin rhythms, chord structures, and melodies into bebop, and in Cuba bands started incorporating bebop improvisation and big band instrumentation into their music. Even today, Latin jazz is basically divided into 3 subgenres - Brazillian (bossa nova), Purto Rican, and Afro-Cuban. Cuba was already a melting pot of African and European music (breeding both the term Afro-Cuban and also famous Baroque composers such as Esteban Salas y Castro), and the sound of Cuban music became even more unique.

The Recipe
The drink itself is very simple and easy to make. First of all, make sure you're using FRESH lime juice from a real lime! Then, make some simple syrup. It takes 10 minutes and you'll use it in a lot of recipes. Using sugar doesn't always end well as not all of it mixes, and crunching on granules while trying to enjoy a drink is no fun. NEVER use sour mix - they're full of chemicals, fake flavours, fake colours, and don't taste very good or balance well.

Simple syrup is just equal parts of sugar and water. To make it, just add equal parts of sugar and water into a pot (I usually use a cup of each), simmer on medium-low heat until the sugar is dissolved, then pour it into an empty bottle of some sort. Keep it in the fridge. That's it. It's that easy. Because it's that easy, I don't ever want to see you using sour mix or crappy sweeteners anymore.

As mentioned above, Embury's published recipe has a 8:2:1 ratio. The current International Bartender's Association has it at 9:4:1 rum:lime:syrup. The ratios are all over the place depending on who you talk to. I always prefer things on the more tart side, which is traditionally how cocktails were made, so as such I often make it like this:

Though more and more I've started knocking the lime down to 1/2oz as well, really letting the rum take over.

You can also serve it just on ice in a rocks glass, which is how they would have served it in Cuba mid-century.

The Rum
I'll chat about rum in general another time, for now I'll just talk about choosing a good one for home mixing.
White rum has a very subdued flavour and mixes very well, but is not as interesting. Gold rum has a little spice to it and more fruit and vanilla flavour and I find it makes fantastic fruit drinks, such as Daiquiris. Aged or Dark rum will have a much heavier taste and has more molasses character. Certain dark rums can overpower a cocktail, but can also be great in drinks like the Old Cuban, or a rum Manhattan. When I say spice, by the way, I don't mean these rums have actually been spiced. When they are aged in barrels that contained spices or whiskeys, they pick up those flavour profiles. You can also use spiced rum, which will really change the cocktail. It will be much sweeter, so you won't need as much syrup to balance.

What rums should you buy? Well, Appleton Estate Extra Old (from Jamaica), and Mount Gay Extra Old (from Barbados) are smooth, interesting, and really great for the price point - and they're available in most BC Liquor Stores. They are, however, somewhat pricey in B.C. at $40 and $45 respectively. More affordable but still awesome rums are Havana Club 7 Year Old at $35 (which is the most fitting, being a Cuban rum! - also check out their 3 and 4 year old white rums) and Mount Gay White Rum or Eclipse (gold rum) at $26. If you want to try a spiced rum, Sailor Jerry's (from the Virgin Islands), which goes for $29, is a typical choice but I find it much too sweet. Kraken is a more exciting choice, but overall I suggest staying away from spiced rum. There are so many rums that are amazing on their own from all the natural and normal processes that spiced isn't really worth your time.
[[ Edit: since writing this post I've tried MANY more rums, and the range of flavour and quality is mind-boggling. Zacapa to El Dorado to Banks there are just so many great rums out there that will dramatically change your cocktails. Affordability-wise, I stick to the above: Mount Gay, Havana Club, and Appleton Estate, but will add Flor de Cana to the mix. Their white rum is very usable, and the 5 and 7 are very dark and great for mixing]]

For a Daiquiri, my favourite of the above for light rum is probably Mount Gay Eclipse gold rum. It pairs really well with fruit, but has enough interesting flavours and subtle spice to draw your attention through any cocktail, and I even drink it straight it's so smooth and yummy. I also definitely suggest trying out the Mount Gay silver rum, which is the same price and a little less interesting, and obviously a little sharper due to the lack of aging, but still very delicious. The more expensive rums are arguably wasted on a fruit cocktail, so I wouldn't go for those unless you're rich or just want to drink rum straight or old-fashioned.
A final note: don't buy Lamb's or Bacardi. They suck. If you pay a few dollars extra - literally - you can get way more interesting and delicious rum.

In the future I'll be doing a rum post, similar to those I've done on tequila, bourbon, and gin, so as to have a comprehensive list of the rums available to us here in B.C. and which ones are worth the price tag.

So, sip your delicious Daiquiri with some delicious rum and enjoy this song by Tito Gomez with Orquesta Riverside, a popular Cuban jazz group during the 1940's and 50's who blended Afro-Cuban music with big band instrumentation.