How to tell if a bar is crappy (before you even order a drink): Part 1

So I'm going to do a short series on judging a bar by everything but the taste of its drinks... so you can prevent having your taste buds, dignity, and wallet suffer.
Some of these are general rules and don't apply everywhere, which I will note. Most of them, however, are really good guidelines to follow all the time.
Use both to get a good idea of how good a bar will be before you even sit down to order.
And yes, this is obviously my personal opinion, but I drink a LOT, and I try out a lot of bars and a lot of drinks and a lot of bartenders, and that's a great way to get a sense of not only what you want, but of general quality. Let's get started...

1) The Cocktail Menu
This is the quickest and easiest way to get a good idea about the quality of a bar.
If there is a list of "Martinis," nobody at the establishment knows fairly basic knowledge about cocktails. The Martini is one particular cocktail, not a a general type of cocktail, and moreso, it's not a type of cocktail that includes tons of sweeteners, liqueurs, and worse - vodka (yeah I said it).

Any place that has a "Martini List" has staff or bar managers who don't know one of the most famous cocktails ever, and that's a bad sign.

Secondly, the length of the cocktail menu can also give some clues as to its quality. This is not always the case, but I definitely feel safer at a restaurant ordering from a small menu, because this means they have decided that these are the best dishes and cocktails they can make for you. They have designed and honed this menu for the guests. Bad bars often having pages and pages of overly sweet and terribly named drinks. I have also seen seemingly good bars give themselves away like this as well. I recently had a bad experience at the Keefer Bar in Chinatown, which had good reviews, and was even featured in the Georgia Strait as leading the way in the new "cocktail revolution." However, the Keefer has a HUGE cocktail menu filled with original concotions and modern variations including housemade bitters, teas, syrups, etc, that in the end are only there as buzz words. Ecchinacea and absinthe and passionfruit infused gin and blah blah blah probably sounds really cool to people who are used to seeing "The Cookie Dough Martini" or some other crap. Upon tasting a good selection of these, however, we found that all these flashy ingredients weren't balanced very well, and all the drinks we tried were just a blur of non-distinct flavours. Meanwhile, if you go somewhere fantastic like the Pourhouse or the Refinery, they have a very short cocktail list that alternates every couple months and features top to bottom fantastic drinks that have been chosen for good reason. Food is almost always the same way. You never, or rarely see large menus at very good restaurants.
This one is more of a general rule.


Lastly, if there are pictures on the menu, and you see blended drinks, or any kind of crazy colour, don't order anything. Cocktails should never be neon coloured, and generally aren't bright green or blue (yes, I know about blue curacao, but I haven't seen a decent use for it yet). And don't argue with me via absinthe - real absinthe is not bright green, its artificial colouring is.Oh, and avoid ice cream. Booze and ice cream is only good when you're 13.
I'm including a picture below of a cocktail menu that immediately lets you know that you should not order ANYTHING. I apologize to the franchise in question... I still enjoy your Clucks and Fries occasionally... 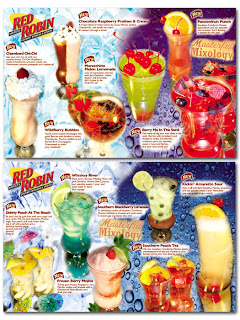 So, look out for "Martinis" plural, look out for very long cocktail lists, be wary of exciting buzz words, and avoid neon colours. Part 2 coming soon...
Posted by Rhett at 23:29