Fernet February: "The Parliament" from The Diamond 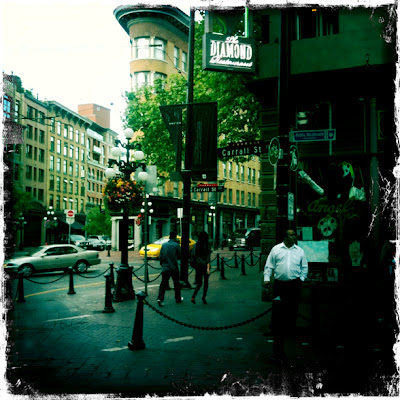 Tonight's recipe is a change of pace from what we've seen so far, and a big change of pace for me because of the base: Cachaça. I've never owned a bottle, and I've had very few drinks with it at all. While similar to rum (it's distilled from sugarcane juice, whereas rum is distilled from molasses which is a by-product of extracting sugar from sugarcane), it has a much more raw flavour, and I would describe it as more harsh. It's actually the third most consumed spirit in the world, but a big reason for that is the fact that it's almost all that Brazil drinks (with its national drink being the Caipirinha), and Brazil happens to have a huge population. In fact, only about 1% of Cachaça made in Brazil is exported out of Brazil.

What's not different about tonight's recipe is that it comes from another bar in Vancouver's Gastown. This area does happen to have most of the best food and drink in the city, so that's not really surprising. Hidden, like so many amazing places are here, The Diamond is on the most famous corner in Gastown, across the street from the statue of Gassy Jack. Now, if you're not very observant, you might have trouble finding it because it's above you. The entrance to The Diamond is just a single doorway leading upstairs to what feels like a secret hideout only you and anyone else who has the password knows about. While this speakeasy sort of feel is exciting as you head up there, enjoy a cocktail and look down on the lights and brick streets of Gastown, it does unfortunately also seem to extend to the service, which has been less friendly than I'd like the times I've been there.
However, the drinks are delicious, the menu is smart and full of great choices (including an "Overlooked" section with such gems as The Chrysanthemum), they're open late, and they even offer weekly bartending classes.

My last visit there was exciting for a few reasons - first, it was really late and everything else was closed which lent itself nicely to the ambience, second, I got to try the The Parliament cocktail featured below, and lastly I also got to try a different, off-the-menu Fernet cocktail created by my bartender for the evening, Patrick. He was kind enough to not only make the cocktail for me very near closing time, but also write me out a recipe, which I will also include below.
The Parliament, created by Diamond co-owner, Josh Pape, is harsh on my tongue - again because I don't have a real taste for Cachaça - is complexified by the Fernet, softened by the honey, and tied together with the lime. It is definitely a well-crafted drink. The "Irish Cabana Boy," as Patrick called it, is kind of a variation on The Trinidad Sour, which features a whole ounce of Angostura bitters balanced by orgeat syrup and lemon. It comes off tasting similar, but much less complicated simply because the two amari, while dense themselves, just don't cut through the way Angostura does (as to be expected). It was delicious and exciting, and the first Fernet drink I had tried of this kind (though I moved on to taste a similar idea at The Keefer the following night, but more on that later). It's an excellent post-dinner cocktail. Both the selections tonight are worth a trip to Gastown, but so is most of The Diamond's menu.
If you feel like a late-night, secretive sort of evening of impressive cocktails while looking down on beautiful Gastown, hit up The Diamond - just make sure you don't miss the entrance or forget the password ;)


(the mL measurements are the indended measurements for these drinks, and the oz listed are approximations for home experimentation. Head to Diamond to ensure these are made properly!)

Shake and fine strain into a chilled cocktail glass.

Photography from Scout Magazine
Posted by Rhett at 01:36