In the interest of keeping things interesting for the reader, and saving myself a little time and a little redundancy, tonight I'm going to combine the Fernet February cocktails with a review of the same establishment - L'Abattoir. 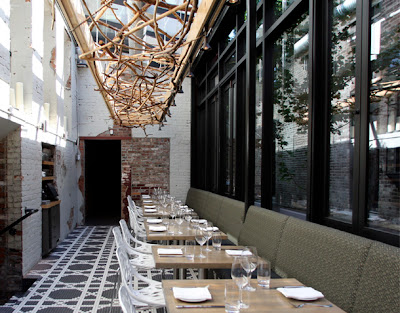 Gastown has a surprising number of great destinations for food and drink considering the size of the area. Once you're on Water Street, it seems like you can't walk 50 feet in any direction without bumping into a good-looking menu, and once you're greeted by Gassy Jack himself at Carrall Street the options are overwhelming. However, now that I've been to dinner a few times, I can easily say that L'Abattoir has some of the best food in Vancouver, and that should always be at the top of your list for an amazing meal if you're in the area.
Situated adjacent to Blood Alley, and aptly named (meaning "slaughterhouse"), the history of the building is palpable when you step inside. Blood Alley has numerous colourful histories (most of which have been disproved), including public hangings, murders, slaughterhouses, and hangings. The alley is so renowned for its creepy ambience and supposed hauntings that the crew from "Paranormal State" even spent the night there.
The brick road has sunken gutters that were supposedly used for collecting blood from the slaughterhouse, but of course could have also just been built for rain. The colourful histories are much more exciting, so I like to pretend they haven't been completely disproved. The L'Abattoir building itself is the self-proclaimed site of Vancouver's first prison, and while refurbished with very cool modern touches, it has a dark, decrepid, and jail-like feel. White paint (intentionally) peels off brick walls, and a huge lattice-work of antlers hangs overhead in the downstairs dining area as you sit in wood-design chairs over tile flooring. The whole place is a strange juxtaposition of new decor with warm wood and soft light, and old, harsh brick and tile. 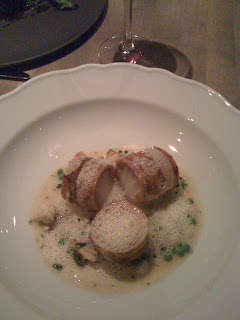 As mentioned, the food is fantastic, and the menu changes often so each time you go you'll have new options. I wouldn't suggest coming if you're vegatarian, however, as every menu option uses meat - but what do you expect going to a restaurant in Blood Alley named "Slaughterhouse." My dinner there this evening alone is making my mouth water all over again - fillet of Pacific cod wrapped in bacon and pork sausage covered in a lobster sauce froth and served with a fricassee of white beans (see photo to the right). Mmmmm...
They have rarities as well, such as sweetbread and escargots.


Now the bar, while very small, is worth the seat you'll wait for. The angled shelves completely covered in interesting glassware, bitters, liqueurs, and a huge selection of whiskey/whisky are almost disorienting (in a good way). The menu, designed by head barman Shaun Layton, has a very classy selection of classic cocktails, including some rarer selections such as The Fourth Regiment and the Hanky Panky (Shaun even sent me an article he wrote on the latter, which I hope to utilize soon), and continues on to some very well-crafted and diverse originals. I've tried almost every original currently on the menu now, and there is definitely something here for everyone. While ones like the Commercial Drive (Cinzano Orancio, Ramazzotti, grapefruit liqueur, lemon, sparkling wine) and the Gastown Swizzle (Plymouth gin, Aperol, passionfruit, lime, Fernet float) lack balls, as I like to say, they are still interesting and balanced. Others, such as the Slaughterhouse (Cognac, Elixer Vegital, sugar, aromatic bitters, orange oil, Chartreuse mist) are well-crafted, deep and complex, and very enjoyable. Other notables include the Meat Hook - a variation on the Red Hook - made with Sazerac Rye, maraschino, Punt e Mes, and Ardbeg 10-year, the last of which adds a very smokey complexion, and my favourite on the menu, the Butchertown Cocktail, which contains bourbon, Banks rum, Beckerovka, Cynar amaro, french vermouth, and tobacco bitters. 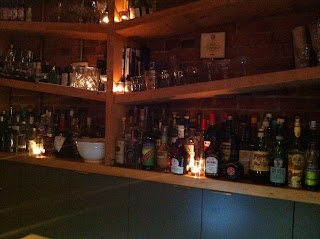 The bar has a very different approach than others like The Keefer or The Refinery in that there aren't any outlandish ingredients scattered throughout and there seemingly aren't any house bitters or syrups or tinctures. Like Pourhouse, the focus is very much on classic cocktails, and simplicity in ingredients but diversity in flavour. While I very much enjoy visiting the aforementioned bars and even dabble at home in making my own ingredients (I'm even stock-piling ingredients to make my own bitters right now), this philosophy is much closer to my heart and I appreciate it. For example, I asked Shaun if they make their own Boker's bitters or if he tracked some down somewhere, and his response was "I let the experts who have access to all the right equipment, time, and ingredients make bitters - I'll gladly use them in my cocktails." Again, as much fun as crazy infusions and creative ingredients are in mixology right now, there's all of a sudden something refreshing about that attitude.

On to the Fernet drinks.

First is on the menu. It's very light and fruity, but gets more complex as you stir the Fernet into the drink and more flavours start to play off each other. It's another great example of how well Fernet can pair with fruit.

The second drink I haven't even had a chance to try yet, but don't worry - I'll be back soon for a verdict ;)
At a glance it seems a little insane, mostly because of the banana syrup, but Rittenhouse is one of my favourite ryes and any drink with Boker's bitters is rare.

So, like Diamond and Boneta, these recipes use mL rather than oz. I won't put a translation this time, but just remember that 1oz = about 30 mL (29.6 to be exact). These recipes in particular are so precise, I suggest you just make your way to Gastown and try them out. In fact, make a night of it and have a nice dinner too - you won't regret it. It's expensive compared to the average, yes, but you usually get what you pay for, and L'Abattoir in particular it's worth every penny and more.

Thank you to Shaun for his contribution to this series and thanks to everyone at L'Abattoir for running an excellent bar and restaurant in this beautiful city of ours.