So it's close to midnight and therefore kind of late for this post, but I'll do it anyway.

It's February 29th, 2012. A leap year. So, obviously, what is a more fitting cocktail than the Leap Year Cocktail? The great thing about this one is that it's a classic from one of the greatest bartenders of all time, Mr. Harry Craddock of the Savoy Hotel in London. The great thing about discussing any Craddock cocktail is that I get to share an Al Bowlly song, since they both worked at the Savoy Hotel at the same time, and Bowlly is one of my favourite singers ever.
(You can read a little more about Craddock and Al Bowlly here in the post about the Corpse Reviver #2).

One of the exciting things about the Leap Year is that we can actually pinpoint exactly when and by whom it was created. Craddock, while running the bar at the Savoy after fleeing from Prohibition America, created the drink specifically for the leap year party at the Savoy on February 29th, 1928. This is also the year that Bowlly first made his appearances at the Savoy with Fred Elizalde, before moving on to work with Ray Noble and record the most famous songs of his career (while also playing at the same hotel).

So first, let's find out how to make the cocktail... 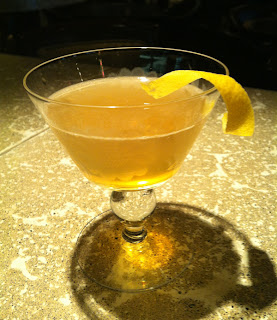 Combine ingredients in a mixing glass, add ice, stir, strain into a coupe, and garnish with a lemon twist.

So here is a cocktail containing juice that you won't be shaking. (Previously I've mentioned a general rule that you should only shake cocktails that contain juice, cream, or egg, and everything else should be stirred). Because the amount of juice is so small, there isn't as much force required to fully mix the ingredients, and stirring works just fine. If you want to shake it, feel free, but it's not really necessary.

The Music
Al Bowlly we've already discussed on my post about the Corpse Reviver #2, so let's just talk about Elizalde. As a young man he bounced between Europe and America, between law school and leading jazz bands. By 1927, he had truly chosen music as his calling, and led a new band in England on some famous late 20's recordings, and performing regularly at the Savoy Hotel. He openly criticized European jazz for being too classical-minded, and tried to adopt more American rhythms and styles into his band (fitting, what with jazz being American and all). Savoy Hotel crowds were famously split in their reception of his band, with the younger crowds loving the dirty, rhythmic, and American big band sound, and the older crowds were offended. By 1929, the BBC radio chose not to renew his contract because of this mixed response, and further poor receptions marked the end of the band. He thereafter composed mostly classical music, and worked with such famous composers as Wagner and Ravel, and after a fairly long life (for the time), retired and passed on. While his jazz years were very short-lived, they were integral to modern European music as he pushed for real jazz, and therefore the most important modern movements in music, to become a mainstay.

For the Leap Year Cocktail, please enjoy this collaboration between Fred Elizalde and Al Bowlly in 1928, when they were both working at the Savoy Hotel in London while Harry Craddock was creating and serving this particular cocktail. (Note how much higher and thinner Bowlly's voice is as it's just at the beginning of his professional recording career).


[ Photography by Eat Magazine from Shawn Soole at Clive's Classic Lounge in Victoria ]
Posted by Rhett at 00:00