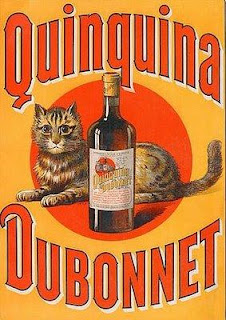 Next is a classification of aromatized wine that isn't really referred to anymore, despite there being several very popular products that fall under its umbrella. Like vermouth, these classifications have blurred, in part due to the limited availability of some of the ingredients used in production, but also likely because people's tastes have changed so much and spirit and wine companies have shifted with that trend.

As mentioned in my post on vermouth, its original ingredients included wormwood, and a separate group of aromatized wines included primarily quinine and were appropriately named "quinquina" (keen-KEEN-ah). Quinine has a decorated history in early medicine dating back to the mid 17th century when Italians used it to cure malaria. Its source is Peruvian bark, Chinchona bark, or "Jesuit's Bark," which was used by indiginous South American people as a medicine. Italians there at the time noticed this and brought it back home where it became common use throughout most of Europe, especially amongst sailors who drank it simply with water. Adding a ration of gin made it more interesting, and a little lime made it more palatable (and also warded off scurvy), and thus is the birth of what we now call the Gin & Tonic. Medicinal tonics, as always, lead to popular social and recreational libations, and the French in particular enjoyed steeping their wines in it along with other herbs. All but one of the well-known quinquinas are French, with Cocchi Americano being Italian (of course it's essentially Kina Lillet, which is French).

"Americano" is actually another classification of these wines ("amer" as in bitter, not America) with a stronger focus on gentian root, and often contained wormwood as well. Americanos and quinquinas are usually grouped together, and I actually can't seem to find any particular product that is clearly defined as just americano. I assume Cocchi Americano is one, but only because of the name, because the flavour does include quinine and it can therefore be considered a quinquina as well.

Chinchona bark, as it is most often called today, is impossible to find in Canada as far as I've found. In a somewhat recent attempt to make my own bitters, I went from herb shop to herb supplier and so forth and none of them carried, none of them knew anyone who carried it, and a handful of them had no idea what I was talking about. So I ended up buying a bag of it for $2.00 at Pike Place Market in Seattle. That's a pretty typical end to most Vancouver stories.

Here are the only brands of quinquina (and americano?) that are available in the U.S. market:

Byrrh - from Thuir in 1866, one of the few fortified and aromatized wines to begin with a red wine base.

Cocchi Americano - originally created in Asti, Italy, in 1891. This is the closest taste you will find to original Lillet (Kina Lillet) since the recipe was changed in 1986.

Dubonnet - from Paris in 1846. The "rouge" is the classic recipe (or so we think), and the "blanc" is a newer American-market invention. After the the 1940's, the Dubonnet available in the American market has actually been made under license in Kentucky, which of course has led to debates on the validity of the product. 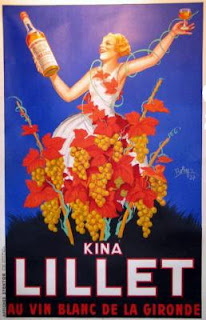 Lillet - from the Bordeaux region in 1887. As I mentioned in earlier posts, Lillet isn't really a quinquina anymore since it barely contains quinine - if any - so essentially serves as its own product and classification under the broad umbrella of fortified wines. It is essentially a dessert wine, being a blend of Bordeaux wines fortified with a little orange liqueur, so the proof and sugar contents are higher, but otherwise tastes much more like a wine than a vermouth or anything else. In 1986 the producers removed all or almost all of the quinine as well as the "Kina" in the title. The rouge version has been around since the 1960's, but only recently became more readily available, and a rose should be hitting the market soon. Any classic cocktail calling for "Lillet" should be made with Cocchi Americano as this is the most accurate representation of the flavours intended.

In Canada, you can easily get Dubonnet and Lillet at any decent liquor store, and you can find it for less than the states (yay us!). However, Bonal, Byrrh, and Cocchi are not available at all, and will require a trip down south (and the Cocchi is worth it).

Darker quinquinas (such as Dubonnet or Bonal) can serve in place of sweet vermouth in a cocktail, but balancing issues will arise so make sure you taste what you're doing! Similarly, Lillet and Cocchi can replace dry vermouth, but Lillet in particular is so light and sweet in comparison that you will not get the same results. With great products like Dolin unavailable to us up here, we are stuck with heavier-tasting vermouths that are more present in a cocktail than you would sometimes like, and an interesting idea might be adding equal parts of Lillet and vermouth instead. I just came up with that right now and have to go try it...