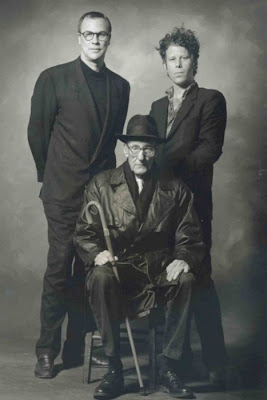 I suppose it's about time for me to share a drink of my own creation. This one may not be a typical summer sipper, but it's very interesting and on the brand new cocktail menu at Pourhouse, so what better time to share it than now.

I have been intrigued with the idea of using a soft mezcal in place of vermouth in a classic cocktail. For example, making a Manhattan with 1/2oz dry or sweet vermouth and 1/2oz mezcal to go with your 2oz of whiskey and some aromatic or chocolate bitters. Lately at Pourhouse, we've also been intrigued with the idea of using multiple spirits in one drink while still maintaining a consistency in flavour (see also Christopher Flett's "Avenue and Davenport," containing both rye and bourbon - also on the new menu). My thoughts inevitably turn to the Negroni, as it's the perfect classic cocktail for creative swapping.

The drink is a fairly unexpected combination of elements, but has a surprisingly cohesive flavour, albeit complex. While the big and fruity body of Spanish brandy provides a backbone, the smokiness of mezcal is pleasantly subtle, and the Cynar showcases its range of flavour and dry bitterness. This is a "drinker's drink," so to speak - probably unapproachable to the novice but exciting to the veteran.

When trying to come up with a name, I asked my lady and muse for ideas (as I always do). She asked "what is the drink like?"... and I responded as simply as I could: "dark, bitter, and complex." To this she almost immediately replied "The Black Rider." There couldn't be a more perfect name.

In 1988, theatre director Robert Wilson, playwright William Burroughs, and musician/songwriter Tom Waits created a musical of sorts based on the German fable "Der Freischütz," an opera by Carl Maria von Weber. (This musical is more famously an album recorded by Tom Waits in 1993).

I should say "spoiler alert" here, though it is a fable and you can probably guess where this story will go.

The Black Rider tells the tale of a file clerk who falls in love with a huntsman's daughter. The clerk must of course gain the huntsman's approval for marriage, but has no shooting skills. He too eagerly makes a deal with the Devil for some magic bullets that will always be a sure shot - all but one; this bullet will be under the Devil's control. Predictably, on their wedding day that final bullet hits the clerk's bride and kills her. The clerk goes mad and joins the Devil's carnival of the damned.

Stir ingredients with ice, strain into a cocktail glass.

Say, come on along with the black rider, you'll have a gay old time.